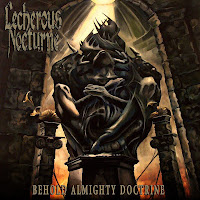 My first whirlwind waltz with Lecherous Nocturne came with their 2008 sophomore The Age of Miracles Has Passed, a technical and complex spin on the combined ethos of Suffocation, Morbid Angel, Cryptopsy and Hate Eternal which came and went with frankly not enough fanfare. Granted, this was material with an appeal for fans of faster, more extreme inclinations, not incredibly popular in the middle of the 'new old school' revival, yet for an initial exposure, it was definitely another of those discs that made me feel sad about my own musical abilities, even after decades. This time out, for their third full-length overall, and second for Unique Leader, I wasn't quite so swept away, but it continues along a comparable course, unlikely to disappoint those with a preference for calamitous, ballistic, bristling intensity that rarely leaves space to breathe.

It takes only a haunting, dark ambient intro and about 30 seconds of "Ouroboros Chains" to relay the message that Behold Almighty Doctrine is not banking on its user-friendliness, or accessibility. It's like None So Vile, Covenant and I, Monarch spiking an energy drink with both speed and cocaine, then jerking one another off. Spastic floods of crunching, churning rhythm guitars cede into walls of accelerated, porcupine spine tremolo picking. The bass guitar is broad and murky, creating a sense of confusion and catastrophe as it, too, rifles through millions of notes, and the sheer numbers of patterns invested into this and every other track on the album pretty much guarantee the alienation of anyone seeking simplicity or nostalgia. Drums are loud, abrasive, and move with such celerity that, combined with the guitars, constantly gives an impression that the record as a whole is about to unravel, much like the unprepared listener's sanity. They'll once in a while break into some more clearly discerned riff progression, but further eruption is inevitable: like an active volcano on an Earth spinning at an exponential rate of progress around the Sun.

Behold Almighty Doctrine is like a bad day at work that never ends, where just about everything that could possibly irritate you is happening at once, and you can either roll with the painful pressures and revel in the chaotic emissions, or flee to a safe spot under the stairway. You wouldn't want to listen to this while driving in traffic, but if you give yourself plenty of room to thrash your limbs around, it's an efficient means of calorie burning. The only real breaks in the action are the intro/outro, and the brilliantly diabolic piano run in the "Prelude No. 2" interlude, which seems to imply that 'hey, even if we were writing music 200 years ago we would still fuck you up'. The vocals are messy, salacious barks and rasps, and once in awhile the guitars fuse into a more dissonant, black metal inspired chord progression that adds a bit more balance to the horrific convulsions Lecherous Nocturne deems 'songwriting'. This is daunting, unapologetic shit here, and not for the faint of heart, or anyone who has difficulty following such dextrous, intense sonic speculation. Overall I found the riff selection mildly less remarkable and memorable than on the previous outing, but fans of groups like Krisiun, Behemoth, Belphegor and Hate Eternal should take a painful taste of this, and let it roll around on and then possibly rip out their tongues.