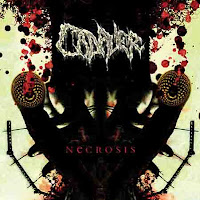 Cadaver's third full-length Necrosis was a re-branded return to the death metal roots that spawned the band, but by no means was it a retread of their seminal efforts Hallucinating Anxiety (1990) and ...In Pains (1992). The years spent in the Cadaver Inc incarnation had rubbed off on the group, and they sought to pursue a more original approach which, like Discipline, which incorporated a number of genres into a fresh and compelling terrain. In many ways, this is the most creative album of the 'pure' Cadaver canon (discounting Discipline), and the first case where they no longer sounded an also-ran of a prior established act. That's not to imply that it's their best work, but certainly as a catalyst for future innovation, this was a decent setup, and I only wish that they had chosen to capitalize upon it. Alas, busy schedules with other acts as diverse as Aura Noir and Apoptygma Berzerk stood in the way of the band really being a 'thing' again, but they've reformed for shows in recent years, so it's not beyond possibility that we'll ever hear a studio follow-up.

Cadaver has very often been branded a 'death/thrash' hybrid, but nowhere is that more apparent than on this record, which clings only by a tenuous thread to the former genre. Traces of the Cadaver Inc black metal years remain in some of the more accelerated and abusive paced chord progressions, and also in the clever use of dissonance to provide a more cognitive mood to the rhythm guitar arrangements; but in general, the album is composed of incessant tremolo picking that straddles the border between a modern Slayer-like speed/thrash and similar classic death and grind sources which once inspired their early albums. One of the most striking components of Necrosis is its guitar tone, which is less distorted than in the past, creating a boxy and humble fluidity that feels more fulfilling than some brash, over saturated gain. Thanks to this choice, even the most familiar and uninteresting riff patterns feel so manic and full-bodied that the disc retains a sense of thrill and potency throughout its entire playtime. In addition, the use of melody is far more precise and memorable than on any prior Cadaver release. As a quirky, atonal spike in the opening of "Heartworm". A cutesy tremolo fill in "Decomposed Metal Skin". A bluesy, jangling minimalistic lead in "Odium". Cadaver had often seemed to avoid lead-work, and while these aren't full-on, indulgent cases of shred-work, they do well to enhance the reach of the music.

One element I wasn't entirely sold on here was Apollyon's vocal style. Gone are the visceral rasps of Discipline, or Ole's growls from the first two records. Instead, we've got the straight up, gruff bark that he uses in Aura Noir, only it seems more monotonous here, and less given to a sense of tormented variation. At times I was reminded of a Nocturno Culto, but other than a few interesting lyrical strategies, like the counted up chorus in "Evil Is Done", I felt that they were a fraction too blunt and indifferent. Not to a 'deal breaker' level, because the music is simply too efficient to allow much disappointment or distraction, but more of a nuanced style (even using the same singer) would have been preferable. On the other hand, the rhythm section here sounds quite fantastic. Drums are brutal without feeling brickwalled or unnatural, and the bass lines have more of a mid tone than on Discipline, not to mention that the lines just stand out more from the rhythm guitars. All in all, there's definitely a bit of a dry, natural, jam-room feel to the record, as if they didn't decide to just drown everything in reverb, and so almost all the atmosphere comes through the riff delivery, which in this case is entirely acceptable.

In terms of songwriting quality, the first ten rampant minutes to this thing are positively phenomenal, really setting up the listener for a mood of blasphemy and destruction. Love the little subtleties to the riffs, but I felt that the middle of the album sagged marginally as far as its creativity. Granted, it's still pretty damn consistent, and nothing lacks focus or vital energy, but a few of the tunes like "GoatFather" and "Unholy Death" were not as massively memorable as "Decomposed Metal Skin" or the intense finale "Heartworm". Ultimately, though, this was a very positive transition for the band. New label (Candlelight), and a new sound with which to win over new fans and hopefully bring back some of the originals. Hallucinating Anxiety remains my personal favorite of the band's discography, despite its more derivative nature, but with Necrosis I would not argue that they captured a more personal, defined sound that I preferred to either ...In Pains or the Cadaver Inc sidetracking. When looking back over their history, its a blessing that they've yet avoided repeating themselves. Each of the four efforts (again, including Discipline) brought something new to their table...Necrosis just happened to do the same for our tables.