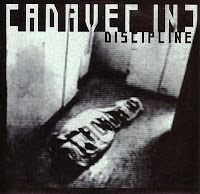 Metal history is littered with examples of bands who either changed or altered their names when shifting styles, but I think how Norwegians Cadaver pulled it off was rather neat. Despite having some limited success as a pure death metal outfit (largely through their sophomore ...In Pains), they decided to call it quits (for the first time) in 1993, and had only a brief reunion in '95 before finally reforming four years later with an entirely different style. Rather than shock their small, pre-installed death metal audience with this new sound, they altered the band name to Cadaver Inc and returned to the Earache Records roster. This was a thrashing black metal incarnation of the band, pretty evenly split between the two niches, with just one original member off the first two records, guitarist Anders Odden, who adopted the stage name of 'Neddo'.

He was joined by Aura Noir/Virus/Ved Buens Ende member Carl-Michael Eide as 'Czral' on drums and  Aura Noir/Dødheimsgard member Apollyon on bass and vocals, both solid multi-instrumentalists; and a lesser known entity, vocalist/guitarist L.J. Balvaz, who had performed on a number of demos in the scene but was seeing his first major metal release on this very album. The aim here was to channel the more savage Scandinavian black metal influences (Satyricon, Marduk Immortal, Gorgoroth) that had sprung up since Cadaver's original demise, and then temper them with archaic, vitriolic thrash not unlike what a few of the members had performed in Aura Noir. But this isn't your frostbitten, wintry woodland variety of escapism; no, Cadaver Inc was honed on murderous, urbane concepts, to the point that they even set up a rather infamous mock 'corpse disposal' service website (complete with a functional phone #), that was convincing enough to pique the interest of local authorities. About the closest band I could compare this to thematically would have been Boston's own December Wolves (late 90s material and beyond), also a member of the Earache family at that time, but sonically Cadaver Inc were more traditional to their native land.

Discipline turned out a rather ferocious album, and while it seemed no one really gave a shit about it at the time, and most still seem to disregard its very existence, I found it a qualified success for such an overt shift in styles. Hostile and angry enough to compete with the more filthy and excessive black metal recordings in that region (Panzer Division Marduk, Destroyer, etc), the presence of thrifty thrash breakdowns ensured that the material felt more riff-focused, more concise, and redolent of classics like Slayer, Possessed and Celtic Frost. Loads of blast beats to the point that it often feels like a hybrid of black metal and grind, but there is also no shortage of thicker, melodic chord floes and choppier, animated picking progressions to break up any chance that this would become monotonous. The sheer ferocity with which this new material was performed had me puzzled why it didn't earn more attention, for it arrived at a time where scenes like Poland's intense, brutal and velocity-based black metal acts were beginning to take off (and fans of those would almost certainly get a kick out of this).

That said, it avoids the claptrap of monotony which such speed often evokes, and offers a good degree of variation along with its crazy, oppressive production. Discipline is an album I like to listen to loudly when possible, because there are plenty of details compressed into each of its 11 body bags. Crzals drums are bold and nasty, and you can really feel the kit as if you were sitting right next to it in some practice space, with a great, tinny hi-hat sound, resonant snares and still a lot of low end pummeling to fuel the voracious rhythm guitar work. Intricate, spurious thrashing sequences course through tracks like "Murderhead", but the band does just as well with a simpler, driving passage of boisterous chords. In truth, I found most of the faster, tremolo based notes or chords during the blast segments to be among the record's least interesting, but they never let this continue for so long that they become too soiled. The bass is thick and precise, but not incredibly interesting in terms of note selection, choosing instead to follow the guitar closely. The vocals were primarily a fulsome if generic, distorted black rasp, but they'll often fly off the handle with some growls and hyperventilated, spastic phrasing like the close of "Rupture".

Granted, it's not always the most original material, and even the better riffs throughout this aren't in the habit of staying memorable for much longer than the album's 39 minute duration, but when you're in the middle of this beast there's really no other choice but to pull out your own hair and ponder upon whatever acts of murder and mayhem it might steer you towards. Some of the lyrics are good ("Deliverance", "Discipline"), some not so much ("Murderhead"), and some just flat out bizarre in concept compared to their environs ("Rupture"). I did find the content a bit back-loaded, with closing cuts like "Snapper Organs" and "Discipline" more fresh, fulfilling and compelling than some of the early content like opener "Primal", but from track to track the entire body of extremity is well paced, the flow and placement of each track like another nail in an improvised coffin sending you to the bottom of the river. It ain't perfect, but it'll do when you're in the mood for something diabolically pissed. Alas, this would turn out to be the sole full-length recording of the band; they would soon become homesick for their death metal roots, and revert to the original Cadaver handle for their following effort Necrosis.