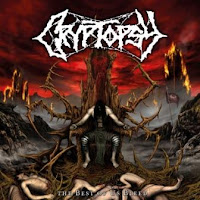 People by this point are probably as interested in reading about one of these soulless 'send a record label exec's kid to college' retrospective career compilations as I am in writing about them, and I've gotten that message loud and clear (and feel much the same). That said, I've a certain compulsion towards completeness when I'm visiting a band's 'official' recorded output, and when and where I spot a collection that might have something interesting to offer, I think it's fair game. In their 20 year history, Cryptopsy have hardly inundated us with metric shitloads of anthologies, live albums, singles, and other garbage, which is to their credit. When a compilation finally arrives, The Best of Us Bleed, it's a rather comprehensive affair with two discs and 32 tracks...

So let's get the bullshit out the way first: most of the roughly 140 minutes of content here is simply lifted off the first six studio records and arranged in a reverse chronological order. Wisely, you get a few rare and unreleased studio tracks (which I'll get to) right at the beginning, and then this journey through time begins with abysmal selections from The Unspoken King and then backwards towards a brighter age. This reprinted content represents about 50% of the total play time, and is utterly worthless to the Crytopsy fan, assuming he/she isn't some 13-year old with no access to the internet. It's the 21st century, we can all shuffle our favorite band playlists in any order we desire on our portable devices and PCs, and we really don't need any sort of 'official best of...' from either a label dude or the band itself. That this was released digitally is just a fucking farce. Sure, they've got some of the real essentials like "Slit Your Guts" and "Emaciate" present from the band's catalog, but then you're also treated to six tracks from their crappy records And Then You'll Beg and The Unspoken King. It balances out, but not to the positive side of the scale.

The latter half of the second disc becomes more interesting as it covers live material and rehearsals, but again, most of this was already released. There are selections from the None So Live album, and also a bunch of bonus tracks that were included on Japanese releases of their albums. The four rehearsal cuts were all demoed for Whisper Supremacy, but we're not talking shitty quality recordings. If you didn't appreciate how that record hit you like a ton of bricks, then you might prefer the drumming dynamics and the lesser polished balance of vocals and guitars, but really these reek of filler and their placement seems like an obvious 'padding out' of the content. If Cryptopsy had thought you should hear these versions, then it's likely you already would have. Not much of a bonus in my estimation. Another rare bit here is the band's cover of Strapping Young Lad's "Oh My Fucking God", repressed from the Covering 20 Years of Extremes collection Century Media had released. I never picked up a copy, so this was my first time hearing it, but it's really no more than a slightly more brutal rendition of the song, in which the vocals are barely even different than Devin's originals, but you get more intense blasting, squealing, and so forth.

And now for the good stuff! The Best of Us Bleed opens with three wrecking ball tracks performed at the same level of intensity as their 2012 'comeback' album, which isn't really a comeback so much as the band returning to its former level of brutality and abandoning the treacherous wigga deathcore direction it had adopted for The Unspoken King. It's a safe bet that anyone to whom the eponymous record appealed will also really enjoy these frenetic and furious pieces. "Boden" was the least impressive, just an over the top series of double bass batteries and Matt going about as brutal as he can with the gutturals and gurgles. The middle of the tune does get more interesting with some winding groove guitars over a blast. "A Graceful Demise", on the other hand, is probably one of the band's best tunes since None So Vile. Atmospheric, evil transitions, loads of clinical tremolo picking rhythms, jumpy and rapid grooves, and an incessant Flo Mounier hurricane with copious snare, blast and kick. "Holodomor" is pretty good too, peppered with jerky and peppy instrumental maneuvers in line with its two sibling cuts.

Granted, the production will be a bit too sleek for some who are missing the first two albums, and Matt McGachy's presence, while appropriately punishing, still feels more generic than his precursor Lord Worm, but these are the sorts of tracks that would have made for a solid EP. Hell, they're good enough to have wound up on the s/t album, so it would have saved some people some cash if they hadn't been stored up for The Best of Us Bleed. Then again, these are pretty much the only reason anyone in his/her right mind could justify a purchase of the compilation. I can't help but think that Cryptopsy has a lot of other unreleased material that they might have held back here, which would have increased the value dramatically. Like I know the Ungentle Exhumation demo was already reissued on CD, but many probably still don't have it. That and a half dozen other obscurities would have been an ample substitute for the album tracks. But hey, wishful thinking and all. As your doctor, I'd advise YouTubing the three unheard studio tracks, or stealing them from a friend, and then listening to None So Vile again.