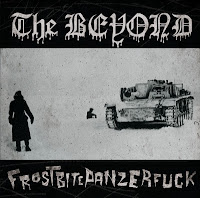 It's pretty obvious on the surface that Pennsylvania's The Beyond have an immediate sense of humor, for the title of their debut full-length alone, Frostbitepanzerfuck brings with it all manner of comic black metal expectations, a goofy, passing nod to Marduk or perhaps to the Boston area's own Panzerfaust. A pretty humble, gore-drenched logo font, a picture of a guy and a tank, it's all quite primitive and you can expect that these guys are going for gags. However, when you actually listen through the music, it's surprisingly built off some very sadistic, misogynistic lyric concepts that one would generally equate to the brutal death/gore, or one of the band's readily apparent influences, G.G. Allin (whom they even offer up a tribute to with "Cunt Sucking Cannibal"). Let's just say the language these guys spit through the lyrics of tunes like "Roto-Cunt" would not do a Susan B. Anthony or a Hillary Clinton proud, but if you're a sick bastard looking for sick expression... The Beyond has your number on speed dial. Even I, a very disaffected, six-foot plus draconian brute approaching middle age had a few chances to squeal 'eww' like a little girl.

Musically, too, this band is casting a broader net than just the black metal expectations. Tracks such as "Goat Sodomizer", "The Splatterhouse Maniacs" or "Frostbitepanzerfuck" all exhibit a mash of Norse and Swedish aesthetics, blast beats and chord progressions that carry an inherent level of melody; but there are also sequences where they adopt a more black/thrash metal bastardization redolent of bands like Impaled Nazarene or Aura Noir, vicious little licks paced out at abusive speeds. Several of the tracks are outright punk/speed metal, like the opener "Roto-Cunt", while you've also got some pretty straight thrash on a tune like "Necro Overload", or fragments of "Attack of the Zombie Brigade". Hell, they even slow to a black doom post-Hellhammer groove on the closing cut "Exterminate Humanity". The range of styles on parade often created a sense of inconsistency to the album as a whole, but in The Beyond's defense, none of them are performed with any degree of incompetence. They know their shit, they just choose to excrete it into a number of slightly disparate bathrooms. The question then becomes one of whether they are carving out memorable compositions into any of these fields, and that is one I simply can't answer with a hearty affirmative.

I found the mix of aggressive splatter-punk vocals with a blacker rasp pretty interesting, almost as if you had a D.R.I. or The Accüsed colliding with a Transilvanian Hunger or Pure Holocaust. However, rhythm guitar riffs here are all pretty plain, familiar and offer little in terms of durable substance or nuance. Granted, these are not traits one often extracts from such a ghastly fun-oriented source of extremity, but the fact that I could detect where each pattern of notes was headed almost as soon as it arrived, over both the black and punk cross-sections of the album, left me underwhelmed. The leads are pretty basic, often based around some tremolo melodies, and there are some spikes of black metal dissonance along with the more chromatic chunks of chords, but neither proves an entirely interesting embellishment. A handful of the tracks are decent fun, such as "Attack of the Zombie Brigade", which reminded me of other deep US underground fare like Dissector or Bitchslicer, but there just weren't a lot of tunes that cried out 'replay me, now, you dog'.

The production was a step above my expectations, with a crisp and fluent guitar tone, deep if not compelling bass lines, and a fresh, crashing balance of snares and cymbals and no shortage of fill; all managed pretty well alongside the vocals, and giving the album a clear 'we do actually give a shit out how we sound' feel. The issue for me was really just the songwriting, but those who might be interested in a mix of something like Speedwolf/Superchrist with some unruly punk rock and roots Scandinavian black metal are not treated with many options. The Beyond is one of them, and their over-the-top, disturbing, unapologetic lyrics and fairly unique rationing of styles are sure to find an audience somewhere. No shortage of sleazy violation here.