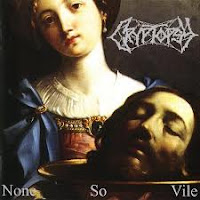 None So Vile takes approximately two minutes of playtime to entirely and embarrassingly eradicate its predecessor. The album doesn't just surpass Blasphemy Made Flesh; no, it mugs the poor debut, blows through its major credit cards before the theft can be reported, stalks and seduces its wife, calls social services and has its children placed into foster care, then falsifies documents and has Blasphemy Made Flesh deported to a lesser stratum of its genre. This is not only one of the first cases I can recall of an excellent 'brutal death album', assuming of course we are discount the albums that we once dubbed 'brutal death metal' in real time during the earlier 90s that turn out now NOT to be 'Brutal Death Metal' after all (do try to keep up!). It's also quite likely the best album of its class from the Canadian scene...I can think of more technical, progressive, experimental death metal discs I've enjoyed from that scene since '96, but this sophomore really helped put the place on the map in terms of the underground's expectations for talent, extremity and sickness.

What's more: None So Vile accomplishes all of these goals without aesthetically altering itself from the first album, a miracle in of itself. This is more or less what I expected after reading the buzz over Cryptopsy in the mid 90s, but it's not a whole lot different in terms of method. There were some shifts in the band's lineup, with Éric Langlois joining on bass, and dropping down to just one guitarist (Jon Levasseur), but in truth the band recycled a lot of its signature traits off the debut. Squamous and voluminous bass-lines constantly giving the rhythm guitars a run for their money (to an extent I really hadn't experienced since a band like Sadus induced the rebellion into thrash metal), but simultaneously adding a substrate of marginal jazz and funk that kept the writing fresh. Multidimensional. A killer, up front drum mix which sounds to this day incredibly authentic in a field where brickwalled production, triggers and detrimental levels of tidiness often create more sterility than a band set out to; in listening through Mounier's performance on the sophomore, I feel as if I'm sitting in some studio space right at the level of his kicks and experience a set of amazingly energetic takes which never fall off tempo. What a spazz! Lord Worm also started to distinguish himself better here, with a hoarser, impenetrable guttural inflection redolent of a sepulcher wall, creating an amusing contrast against the frivolous insanity of the bass and rhythm guitar.

But all of these elements might have easily been projected from the first album. The foremost reasons for this record's success over its predecessor are the dramatic improvement in guitar tone and note progressions. I still feel as if the rhythm tracks often struggle a fraction to keep up with the drums and bass, but they've got a more punchy sense of pacing and clarity that helps them pummel through the mix, especially in the razor-like tremolo sequences which solidify Cryptopsy's lineage to the old school ancestry. Death metal was already about a decade into its existence by 1996, but one had the sense that the Canadians were not entirely ready to abandon the roots to all of the four on the floor, chug-chug-blast-blast alternation that was all the rage as the margins of the genre pushed further into unmatched excess. And that's a huge difference between this and the first album: here, those vitriolic tremolo picking patterns in tunes like "Dead and Dripping" or "Slit Your Guts" are instantly memorable, with an appropriate surgical feel to them that helps aggregate the sporadic blasting passages and churning, gut-fed grooves that place None So Vile into its then-modern context. The leads, too, are wilder and more spontaneous, Levasseur just whipping his dick out to the wind, taking a piss, and having it land on the listener rather than splash back upon himself.

Most people will always evoke the names of Lord Worm or Flo Mounier when waxing nostalgic about this band, but for my money, Jon was the MVP this time out. His playing was frenzied, frenetic, pretty much the perfect pit stop between where death metal had been, and where it was going. That doesn't always manifest into the most striking or infinite re-listenable rhythmic fixtures, and you get a handful of pretty dull grooves wound through the more explosive, interesting composition, but thanks to the overall compactness of None So Vile at 32 minutes, instances of not being entertained are pitifully few. I might not define the album as necessarily 'original', but there were certainly a number of strange bridges with dumpy bass grooves and cleaner, weird guitars that it almost seemed to offer brief premonitions for Gorguts' Obscura, another of my favorites from this scene. Interestingly enough, despite the rabidness of the farting, squelching and burping bass lines, the pure moshing zones, the pinched squeals and other techniques, None So Vile is not an expressly dissonant or inaccessible album. It rips past faster than a pair of collegiate panties at the sound of a Eurotrash accent, and it's bludgeoning nature isn't exactly safe for church, but the clinical melodies infused into the tremolo picking are actually quite easy to follow unto the inevitable, spleen rupturing grooves.

Gotta love the nuances here, like the piano playing that heralds "Phobophile", or the subtle overtures you'll heard in the riffing that tie the band back to its influences. In particular, I heard some Carcass-like chord fixtures, even hints of other British brutes like Napalm Death or Bolt Thrower. Again, the Canadians were not above the inspirations that birthed them; they were building a bridge between these two extremes of expression: the later 80s/early 90s morbidity and the sporty performance and proficiency which had later supplanted it. You can even see that in the wonderful 17th century, Elisabetta Sirani cover image, a clash of the archaic with the band's sick and unforgettable logo. The lyrics were just as demented and interesting as the debut, with Lord Worm assuming a number of 'voices' or characters to create this sense of psychosis that just won't quit. Fuck, "Slit Your Guts" and "Dead and Dripping" have some of the best lyrics in the entire genre...not just silly misogynistic gore, and I'll take these any day over a Cannibal Corpse or Mortician. This sense of ambition permeates the entire album, and even at its most derivative it seems to at least be aimed in the right direction.

Smashing. Fucking. Record. I mean, it's not perfect, and I probably wouldn't take it to my desert island over Consuming Impulse, Altars of Madness, Nespithe, or Left Hand Path, but certainly for the mid to late 90s this belonged in the outstanding company of Morbid Angel's underrated Domination, Cannibal Corpse's magnum-mutilation Bloodthirst, the aforementioned Obscura, or Vader's consistently strong showings. Hands down the best record of its type for '96, and to this day Cryptopsy have not surpassed it. In fact, they've not even produced anything in the same ballpark. Whisper Supremacy, while a slightly more inventive album in terms of riffing structure, could not come close. It at any point the Canadians were well deserving of the hype they've never shaken in nearly two decades, it was this album, and its jubilant wretchedness holds true even to modern times, where a couple thousand creative spinoffs constantly unravel its blueprint on the draft table and scrawl out visceral Cliff's notes in their own blood.