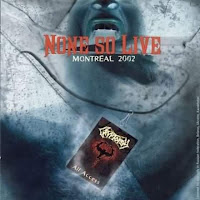 None So Live is a bit of an anomaly in Cryptopsy's career in that it's really their only record to feature Canadian vocalist/artist Martin Lacroix belching his brute gutturals into a microphone. After the sad performance of DiSalvo on the shitty, goofy And Then You'll Beg, he and the band parted ways, and Lacroix served as an interim member until they were able to reconnect with Lord Worm for the ensuing Once Was Not. It, was not, however, Martin's first dance with the medium. I'm not sure how many people remember the pre-Augury band Spasme, who had one record out (Deep Inside) through Neoblast at the dawn of the new millennium, but it's worth tracking down, a spastic blend of technicality and guttural intensity that is well within the ballpark of a Cryptopsy or Neuraxis. In other words, the guy was a natural choice for the spot here, and for what it's worth, he does perform well enough over the older material...

The older material, that, thankfully populates most of this Montreal live recording from the summer of 2002. Of the ten tracks (discounting the audience noise intro and drum solo), eight are taken from the first three albums, with only two stinkers ("Shroud" and "We Bleed") from And Then You'll Beg; so it's clear that Cryptopsy knew what the audience wanted, and that was primarily their seminal brutality. I've only seen the band a few times back in the day (though never with Lacroix), and can attest that this is a fairly accurate representation of their tone on stage, though there's no question some of the intricacies of the technical guitar progressions get lost in translation as they do with many similar death metal acts. The rhythm guitar is rich and punchy enough that it doesn't get shown up by the drums, and yet if anyone had any skepticism of Flo Mounier's abilities, they are splayed out here like a single-man marching band. The snares sound like heavy hail battering down on the roof of some tin shed, while the kicks drop dextrous thunder with superb timing. Langlois' bass lines are deep and muddy here, not popping or squelching with the same authority that they do on the studio records, but ample enough when there are breaks (as in "Slit Your Guts").

As for Lacroix, he doesn't quite imbue the tracks with as much character as his predecessors, but he does have a nice, hoarse bluntness to his tone which is a good fit for the hammering, percussive rhythms. It might have been interesting to hear what he could have pulled off in studio, but he's hardly distinguishable from a number of other potential options the Canadians might have run with. The leads here sound a bit sloppy, and the remaining rhythm guitar gets a bit more difficult to perceive in these sections, but it's probably to be expected if the mixer wasn't going to turn them up. Accurate to the live setting. I was actually somewhat relieved that the two And Then You'll Bet tracks sounded far heavier and more appropriate on stage to their earlier neighbors, largely because the vocals are less goofy and the drums and bass sound thicker with the rhythm guitar, but "Shroud" at least still sounds pretty dorky in a bad way. That was a phase of the band I am all too happy to forget (apart from joking), so I wasn't thrilled that they were partnered up with far better cuts. Overall track selection? I would have loved if a few other tracks like "Emaciate" made it onto this, but it could have been far worse...

I was worried that the drum solo would be too long, but it's really only about 3 and a half minutes of Flo showing off (hey, if you got it, flaunt it), and then they leap into another track. The mix of the crowd is decent, constantly present but not overpowering, and easily drowned up when the band is blasting and churning full bore. All in all, it's a decent accounting of the band's performance prowess, but far from a mandatory purchase unless you're completely smitten with the idea of owning everything they produce. The sound is decent if a bit lopsided towards the lower end, and the track selection is not ideal, even if it offers up a comprehensive taste of the four studio albums to its day. I wasn't inspired by None So Live, but neither was I really turned off.