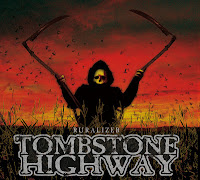 I'm going to make an assumption that most readers of my reviews are at least partial cinephiles, and might have come across a 1968 spaghetti Western flick directed by Sergio Leone and titled Once Upon a Time in the West (with Charles Bronson and Henry Fonda). It's one of my all time favorite films, due in no small part to the stunning photography, both the landscapes and the gritty closeups of the actors, no dirt and sweat spared in its broiling, sun-caked intensity. Here we had an acclaimed Italian director, who probably had no right in creating an iconic glimpse into the idealized American Wild West, that proved unforgettable. When I caught my first glimpse of Tombstone Highway's logo, and skimmed the band's information, I had to admit my curiosity was piqued. An Italian band, performing a mix of stoner and Southern doom?! I could taste the blood, smell the gun smoke, and hear the harmonicas on the wind...

Unfortunately, the Italians' debut did not turn out quite as fascinating as I presumed, but not for lack of trying. For one, this is more or less a record full of garden variety Sabbath-style riffing sequences sauced in a more contemporary, massive guitar tone. Painfully few such stoner/doom oriented acts are capable of evolving this influence into new and interesting ways, so derivation has long proven a monkey on the niche's back. It also doesn't help that the tone, the guitar squeals and the writing in general reminded quite a lot of Zakk Wylde's Black Label Society, a group I consider to be one of the nadirs of American heavy music. Front man and multi-instrumentalist H.M. Outlaw is not incompetent at these sorts of monstrous, blues heavy grooves and making them stick, but the fact is they all feel too damn familiar. For instance the chugging bottom end riff that fuels "Acid Overlord" sounds a lot like Cathedral's "Ride", and the opening sequence of "Graveyard Blues" sounds like an attempt to chop up Kiss's "War Machine" into something sludgier and heavier. The drums do a decent job of complementing the grooves with steady rock beats, and the bass guitar creates a springy support for the axe work, but the rhythm guitar riffs are just too similar to what we've heard in decades of Sabbath, Trouble, Pentagram, Down, and are too rarely inventive or fresh.

Vocally, the band is a little more interesting, since Outlaw has an acidic melody to his timbre that inflates the emotional impact of the record. Almost like a mix of Blackie Lawless, Gene Simmons and Wylde's voice from BLS, but it manages to avoid the pitfall of sounding too much like Ozzy Osbourne (which only a few bands can really pull off). It gets a little old after a few tracks, but the guy clearly has some conviction. The richness of the guitar mix and the syllabic meter of the vocals actually reminded me quite a lot of a few Swedish groups like Terra Firma and Hellfueled, though nowhere near as uptempo and hooky as the latter. The Western theme reminded me of another European cowboy posse, Germany's Desperadoz, but where they throw it straight into your face with all manner of cheesy cover tunes and cliches, coming off like a hybrid of Alice in Chains and Clint of Eastwood, Ruralizer is possessed of a more curvaceous, Southern slang, and some clear psychedelic/doom influences to the lyrics and subject material.

No, apart from some clever banjo plucking in a few spots, most notably the opener "Old Blood" where it is well entwined to the rhythm guitar; or some of the song titles, Ruralizer doesn't feel too specifically as if it were a Western tribute, but more the American South as a whole. This is reinforced with the inclusion of the Mountain cover "Mississippi Queen", which is simply too safe and expected a cover to make much of a difference. I might have preferred some Molly Hatchet or Lynyrd Skynard, but this one has simply been done to death already, and even though Tombstone Highway make it their own well enough, it's just not a highlight for me, among a batch of originals that...well...aren't highlights in of themselves. As hard as I'm coming across, I will say I do like the 'idea' behind this band, just not the execution of these particular songs. The notion of an Italian hybrid of Black Sabbath and Raging Slab (an obscure US group who put out a killer debut of metal-injected Skynyrd) is an interesting one, so I hope as the duo evolves they'll pen up a more convincing riff-set and start to branch out into their own territory. For now, this is most likely to appeal to diehards of BLS, Down or perhaps fans of vivacious burning doom-blues like Trouble's eponymous 1990 record, or its follow-up Manic Frustration. But I wasn't feeling it, and thus I'll have to hang my spurs up elsewhere.