Undersave - Now...Submit Your Flesh to the Master's Imagination (2012) 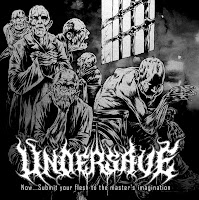 With an approach to composition nearly nearly as labyrinthine as their debut album title, Portugal's Undersave attempt to kick up a little ambition into the current wave of old school death metal nostalgia. It pays off. It pays off rather well, in fact, and though I wouldn't dub it the catchiest or most unique fixture of sound in this scene, Now...Submit Your Flesh to the Master's Imagination definitely belongs to that crop of compelling efforts which seek to push the 'retro' into the future, rather than merely settling for what's simply come before to a fault. We heard this through Horrendous' debut The Chills, through Morbus Chron's Sleepers in the Rift, the eponymous Necrovation sophomore, and works by Sonne Adam, Tribulation, The Wakedead Gathering, etc. That rare ability to move simultaneously forward and backwards through the medium and offer us a more refreshing disposition on a movement that was partly built as a reaction to the brickwalled, mechanical nature of brutal and technical modern death metal. All the while avoiding the cavernous claptrap of the exhausted Incantation clone, and the staggering redundancy of the Swede-o-philiac scene.

When I mentioned that Undersave's sound was 'labyrinthine', I did not mean to imply that they perform with enormous levels of technical complexity, but rather they possess an endless barrage of riffs, many of which are quite vile sounding, so pleasing to the ear on this sort of recording. The rhythm guitars have this abrasive, in your face fuzz tone about them that really stands out, but the rest of the instruments are so perfectly mixed in with them, which allows for an array of other nuances to shine through. For one, the bass often has a lilting, progressive groove to it which reminds me of 90s Death and Pestilence, an interesting marriage with the fleshier tremolo picking of the rhythm guitars. The drums also arrive at the forefront, with a lot of clap and crash to them, but the kicks aren't forced too loudly, so you get a serious old school Floridian vibe which is also felt through some of the riffing influences. It's pretty difficult to compare their writing to any one band of olde, which is precisely what I so enjoy about this album. At times I felt a seminal Finnish vibe similar to a Demigod or Convulse, at others a tint of US abominations like Immolation, Incantation and Autopsy. And of course a hint of old Pestilence. The guttural used here, however, is quite blunt and monstrous, often panned off into a slightly raspier tone, which only adds to the layers and variation of the experience. Did I mention this was only a duo?

Though a number of the songs are heavyweights at 7-8 minutes, Now...Submit Your Flesh to the Master's Imagination clocks in at a concise 42 minutes, much of which is impressive. There is, to some extent, a front-loading of the most quality material, and the titular opening cut and "Digging and Blocking the Exit to the Unwanted Freedom" were my personal favorites, but on the other hand, Undersave was wise to ramp up the variation on the later tracks, beginning at the half-way point, a brief and resonant instrumental called "Akedía". That said, there are quite a few tempos being explored throughout the entire effort, from choppy and moderate blast beats, to currents of salacious grooves, wells of chugging dissonance and explosions of more nuanced and intricate picking progressions. From fore to aft I can't say I was ever treated to anything stagnant, predictable or highly repetitive, and even after a half dozen spins the material really held up. The lyrics have a very clinical feel about them which reminded me quite a lot of the first two Pestilence albums, and their worth exploring just as much as the music itself. With production the consistency of freshly tilled grave dirt, and constantly interesting and memorable musicianship, this is one debut well worth acquiring for any serious fan of fundamental death metal that doesn't play it too safe...