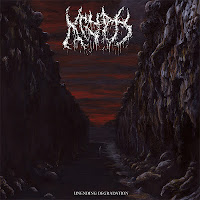 Krypts is one of a wave of younger Finnish death metal acts that, unlike many of their Swedish peers formed over the past 5-10 years, do not seek to merely copy their influences, but return to a primitive early 90s motif through sheer riffing power and atmosphere, two facets of their full-length debut Unending Degradation which are not in contention. That's not to say that the band does not evoke nostalgia for countrymen of decades past, like Convulse and Demigod, but there is no sense in listening through the album that they're above establishing their own crude and concussive identity, while fitting in snugly with the 'cavernous' death metal aesthetic made so popular in Europe and the US these past few years. It's neither genius in its construction, or rocket science in its implementation, but if you're a backer of grim acts like Father Befouled, Funebrarum, Anhedonist, or fellow Finns like Swallowed or Lie in Ruins, I have confidence that Krypts should prove right up... err...down your alley.

They're able to accomplish a lot of density here with fairly simplistic chord progressions, which do not always manifest into the most impressive or memorable of riffs, but maintain the group's crushing quote of rank and foul atmosphere. Songs tend to favor a slow, sluggish pace over which the guttural vocals can stretch out and resonate, but there are occasional bursts to a more festive d-beat tempo. The use of chords here is far more legion than tremolo picked patterns; and they'll often adjoin the churning, chasm-spanning rhythm guitars with dour, mournful melodies that shift the material into a death/doom territory. What separates this from a lot of similar recordings in that whole post-Incantation/Autopsy scene is the loud use of the bass guitar: this thing is murky as hell, cranked to provide a tar-like substrate to the riffing, even if the actual composure of the lines isn't exactly unique or compelling. Coupled with the bludgeoning growl of Antti Kotiranta, as lifeless and bleak as a mortuary wall, Unending Degradation really captures this unflinching sense of morbidity and pathos that never really cedes through the 40 minute play time. They'll break up the weight of the chords with some spikes of a more dissonant melody in the strings, or unleash a brutal undercurrent of rolling double bass drum (as in "Dormancy of the Ancients") to enhance the brutality to beyond mere drudgery, but ultimately this is a consistent, oppressive piece of work that seeks no subtlety in how it casts you into its shadows.

The flourishes of reverb and atmosphere are well done here, but I will admit that it takes a particular mood to really appreciate such a thickly negative slab of suffering. This is hardly monotonous writing, and the band are not merely recycling the same riff endlessly unto boredom, but Unending Degradation does sacrifice a certain level of dynamic range as it spades the listener into a ditch; and I, for one, would not have minded a bit more contrast to really let those heavier moments hit me in the gut. There's also the fact that many of the individual riffs are far from mesmerizing or unique. Functional, and fitting to the mood here, but it wouldn't hurt to add just a fraction of complexity, or perhaps render some of those cryptic melodies into something more evil and hypnotic. Despite this, though, I really feel as if Krypts knows its audience pretty well, and there's definitely a swath of the 'new old school' fandom that will spin the shit out of this record. It's brooding, and sorrowful to the point of sinister somnolence, and thus easy enough to recommend to fans of no-bullshit, no-gimmicks, effective (if not amazing) death metal which serves the purpose of drowning out all sun and cheerfulness from a room. I wouldn't listen to this while heavily medicated, though!