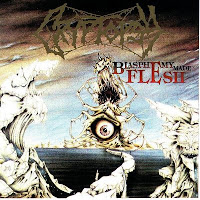 Cryptopsy ranks pretty highly on my personal list of bands whose ratio of enjoyable, interesting music to popularity is tenuous at best, to the point of puzzlement. Yeah, they've got a few good decent albums, one of which is admittedly better than good, but also a fair number of letdowns and misguided experiments littering their discography. Despite the fluid and rampant technical ability they displayed even in their earliest years, and the undeniable, awkward charisma of former vocalist Lord Worm, they were simply not a band I've ever really trusted in to deliver the most memorable of riffs, or evil, atmospheric death metal hymns that burned the old school brutality into my brain for the likely remainder of my existence. It's sort of how I've felt through Suffocation's career, only the New Yorkers got off to a stronger start, and have had a stretch of more consistent material in recent times. I would never deign to disavow Cryptopsy's influence on hundreds if not thousands of brutal and technical death metal acts to follow (in the 90s and beyond), but sadly much of that inspiration took on the form of their least compelling components: the brutal, riff-less bursts of speed and bouncy, empty slam oriented rhythms that are prevalent on a good chunk of their debut Blasphemy Made Flesh, an album which I still to this day consider 'training wheels' for its vastly superior followup.

There were some clear positives when I was first exposed to the band and this record, aesthetic details that no doubt played a large part in their early, infectious spread through the underground. The band's name and logo were fantastic, and the original cover artwork an instant thrill for fans of records like Sepultura's Arise or Obituary's Cause of Death. Cryptopsy were one of the few North American acts licensed to Germany's Black Diamond/Invasion Records, and also one of the heavier acts on that imprint alongside Excrement, Vomiturition, Infestdead, Vomiting Corpses and Lunatic Invasion. Despite the sickness and violent themes involved, the lyrics had a peculiar, personal and poetic sense of playfulness about them, almost like Dan Greening (Lord Worm) was implementing his English studies into a sadistic sideshow attraction. They were immediately unique by comparison to so many of the gore-driven, misogynist fiends starting to cycle into redundancy, who had taken over the more extreme end of the genre; a manic food for thought that showed some obvious effort. In fact, the lyrics of Blasphemy Made Flesh are hands down my favorite part of the album, and I only wish that the songwriting itself had been so compulsory and unusual. Granted, there are a few pretty unique facets to the playing of the other musicians which stood out, in particular the rhythm section of Flo Mouriner and Martin Fergusson, but they're not able to fully compensate for the rather banal selection of rhythm guitar progressions which flew into one ear and straight out the opposite, without colliding in the center to turn the brain to mush.

Blasphemy Made Flesh belonged to that category of 90s death metal efforts which was seeking to push the parameters of its parent genre without necessarily abandoning the inviolable core of the medium. There are a number of 2nd generation tremolo picked riffs here and standard growls which pay credence to the Floridian and Dutch forefathers of the style, and fellow Canadians Gorguts, who had the jump on Cryptopsy by only a few years and would share a large crossover audience. But the emphasis here was to force the speed limit and cluttered intensity of the composition, and less to create resonant, memorable riffs. Where albums like Severed Survival, Consuming Impulse, Left Hand Path, Cause of Death and even to an extent Effigy of the Forgotten had paved the way with foul, mesmeric aberrations of thrash-based techniques, this basically borrowed and rearranged familiar note sequences and then dialed up the volume and elasticity of the drums and bass, which combined with Worm's garbled ranting seemed like a night at a circus with an audience of severed heads. There's a fuck ton happening throughout the 40 minutes of music, but apart from the speed and lyrical ravings, precious little information is retainable, and even if the guitars were configured into more exciting and catchy progressions, they seem a bit too searing, muddled and distant to really matter on a cut like "Abigor" or "Defenestration".

I could see how Mounier's dextrous striking was intimidating for its day; not as far a leap in the belligerence and technique of percussion as a Lombardo or Hoglan from the previous decade, but so fast and involved that it often feels like the sticks are about to escape Flo's hands and start playing themselves. Blasting, fills, and piledriver double bass crashing everywhere against the guitars. What's more, unlike a lot of the bands that later sucked off Cryptopsy's fumes but with a more programmed, polished studio sterility, this sounded quite live and straight to the chin, sans an excess of studio finesse. You could be hearing this straight from the band's jam space, or on stage. The bass lines are incredibly bouncy and copious, almost funky, to the point that where Martin Fergusson hits a higher chord it sounds like some sort of rambling, farting device that adds an air of unintentional hilarity to the proceedings. The guy was a fucking maniac, and even though most would come to identify the position with his successor, Éric Langlois, who has to date performed on most of their records, I can only wonder at what he might have created had he followed a more prolific career in the genre...

On the flip side, the performances of this pair do contribute to the smothering of the rhythm guitar tracks of Jon Levasseur and Steve Thibault, which weren't all that interesting to begin with. Lots of meaty palm muted chugging and fits of basis tremolo picked, surgical precision are alternated in a relish of deep distortion that often disintegrates into background noise for the acrobatics of the other players. Nothing we really hadn't already heard from a band like Suffocation or Cannibal Corpse, and while the songs aren't really lacking for variation, the percussive shifts in tempo are more exciting than the actual notes slung together. As further proof, just listen to how much the leads and melodies stand out where they appear, like the thrashing bridge and eerie pattern at around 3:00 in "Abigor", or the shredding in "Serial Messiah" and "Born Headless". Really, these are the only instances of a tangible 'atmosphere' on the album (apart from an intro like on "Serial Messiah"), and when they strike amidst the blunt, taut, and tiring blandness of the rhythm guitars, I just wish everything else was better written. The playing is all around fast as fuck and slightly technical for the time, but really I'd have just as much luck sitting by the side of the highway and watching traffic pass. After nearly two decades with the album, I've been unable to change my mind on this. Some of the blast beat rhythm guitars as in the closer "Pathological Frolic" are just downright boring.

As for Worm, he grunts and growls with enough gusto that you don't feel the sense of monotony creep in which brought low a number of other mid-90s death metal front men. His techniques aren't exactly unique, but his alternation of the lower pitched, primal troglodyte gutturals and a lot of snarling strangled cat phrases which shift the pitch (but aren't layered over one another constantly like Glen Benton). Not as schizo and attention earning as the lyrics themselves, but neither are they the low point of this recording by a long shot. I'm aware that the guy was known for his crazy stage presence, but this doesn't entirely translate onto the recording itself. He was good at writing, and competent at keeping the listener awake, but it's hardly like the first time I heard John Tardy, Chris Reifert, Martin van Drunen or Craig Pillard where I peed myself and hid in my closet until all the bad monsters would go away. I'm not about to play the 'overrated' card, since the guy still brought something individual to the genre, and was their best front man; but all the same, I was never butthurt when he and the band parted ways (at least the first time between None So Vile and Whisper Supremacy).

Blasphemy Made Flesh isn't shit, and its flaws might be forgiven if I was to blindly adulate every single death metal record released between 1991-1995 (like some folks I've encountered). A decent headbanger with a faint few glimmers of creativity, which places the listener back in its age of conception, but ultimately it amounts to little more than a warmup for its successor. Just another instance where I wish an album was as menacing as it looked. Or as it intended. That I found this disc one of the blueprints for a lot of 'meh' brutal death metal bands to come, or a middling warmup for its successor (a record which actually does deserve its place on the pedestal of punishment), doesn't help its case, but like any other musical medium, I want death metal I can remember. That I can rampage to. Stab to. Cackle maniacally to. Be afraid of. The Cryptopsy debut does not provide that for me; it's more like a steamroller of insipid horror sequels rather than one frightening classic with scenes that I can never escape.