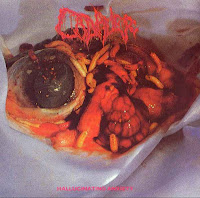 Cadaver has long stood out to me one of the earliest indicators of a 'second generational' death metal act, largely because the aesthetics present on their debut Hallucinating Anxiety felt as if they had been borrowed or built upon a number of other albums which had already arrived by the later 80s. Granted, for Norway, a scene that has to this day always been associated with black metal more than its handful of death groups through the decades, one might place this 1990 record well ahead of its time, but to primeval adopters of the death and grind niches, it's components were already familiar. Not to imply that Hallucinating Anxiety is necessarily a half-assed, uninteresting listen, because in fact I find it their best full-length to date, but they weren't exactly bringing any fresh or innovative elements to the medium; one of the first examples of an also-ran, but they just happened to be a pretty damn good one.

Hallucinating Anxiety is more or less a clash of US and British influences. Riff construction is a mix of clinical grooves circa Carcass or Bolt Thrower, and evil tremolo picked note sequences highly redolent of Death, to the point that they might have fit in rather well with a Scream Bloody Gore or Leprosy. The cover artwork of this album, and hell even the band's name and song titles, were quite close to Carcass in nature, though lyrically they weren't dealing in pure gore and surgery. Beyond that, the grimy guitar tone is derived from a clear Repulsion lineage, and some of the faster, grinding bits are not unlike the first few Napalm Death records. Like a lot of other seminal death metal groups, the pulse of thrash is still quite evident, coursing through the more oppressive, brutal architecture. There are certainly a fair share of faster progressions which wouldn't have been out of place among the more extreme acts of its parent genre like a Dark Angel or Slayer. Hallucinating Anxiety is a mild divergence from its closest stylistic relatives (influences) as far as Old Bjerkebakke's vocals, which while bloody and appreciably menacing, did not stand out quite so much as a Schuldiner, Tardy, van Drunen or Glen Benton; more an impish relative of early Willetts.

The production on this thing is a fusion of the sterile and saturated, the latter thanks to the tone of the guitar, and has proven a bone of contention for many old school death metal aficionados who have a preference for Cadaver's sophomore, ...in Pains, but I actually disagree on that point. As fibrous, rugged and raw as the debut sounds, it only contributes to the charm of its pathological and frightening subject matter. The bass is soaked in a beautiful distortion throughout, most notable where it's grooving alone at the intro to "Bodily Trauma", but hanging in right at the edge of perception throughout the remainder, churning along grotesquely below the more dominant and obvious rhythm tone. Speaking of which, these guitars could serve as a rust remover, so unnatural and soaked in aural chemicals. Even if they seem slightly dry, since there isn't a lot of background atmosphere to the album, they're still very effective at giving the riffing sequences that morbid, otherworldly edge that helped it stand out against the sea of thrash records so prominent in this period. As for the drums, they're a bit raw and disparate from the guitars, often congested into walls of cymbals. You can't really feel much of the kick drum, but it's there, and some early kicks and double bass patterns are woven against the riff cycles, moreso at least than on, say, Leprosy.

Though the songwriting is fairly consistent throughout the 39 minutes of material, I always felt that there were a few offerings on Hallucinating Anxiety that stood out from the remainder. Namely the opening track "Tuba/Ignominous Eczema", a barrage of strutting, evil grooves with a wicked sounding, noisy intro, and a killer tremolo lick around 1:50 that I very much remember learning on the guitar and playing repeatedly at band practices (to the point that I think I even changed the notes and included a similar phrase in some shitty original). I also really enjoy the song "Corrosive Delirium", which was structurally related to a number of Symphonies of Sickness tunes via Carcass. There are a number of other sick songs like "Hallucinating Anxiety" itself, but I definitely felt it was front loaded with its most memorable riffs. The only other complaint I have is that some juicy, dissonant leads would have given the record yet another dimension of cool. Most of the music here does feel as if it's lacking that one added element, but by no means does it cripple the sum experience of wretched, gut wrenching viscera that the musical and visual imagery manifests.

I realize Cadaver was lost among a whole crowd of 'C' bands in its day, from Carcass and Cannibal Corpse to Carnage, Cyanide and Cancer, but pundits for the punishing sounds of antiquity should totally track this down if it remains foreign to them. I mentioned that many point out the Norwegians' sophomore as their magnum opus, and I can somewhat sympathize since the production is far more professional and the album has a more progressive bent, but I found it more derivative of a single source (early 90s Death) than the debut, and Hallucinating Anxiety possesses a very rare personality due to its production 'flaws' that I just can't imagine doing away with. Definitely evokes the same stench of bodily ruptured nostalgia that I feel for other classics around 1990, and has held up well for two decades plus.