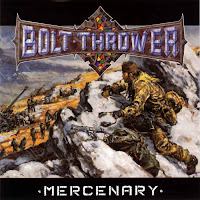 One might presume that, coming after the longest studio hiatus Bolt Thrower had taken since its initiation, the British battalion might have discovered some means by wish to refresh itself, innovate its tried and true, formidable formula. Four years wasn't a whole lot of time, granted, and after the productivity of their 1988-1994 period (5 albums, EPs and live recordings, touring, making a name for themselves), they were well deserved of a pause in the action, but once Mercenary at last arrived, I was rather shocked at just how bland an experience it proved to be. I have long described the record as '...For Victory with most of the life sucked out of it', and that holds up 15 years later, as I still struggle to extract any value whatsoever from this...

What we've got here is a selection of even more simplified-than-usual Bolt Thrower groove riffs, which might have been reorganized from earlier songs, or really belonged to just about any boring mosh oriented groove metal act of the 90s to come along in the wake of a Pantera or Machine Head. Add to these a pitiful few old school death metal tremolo progressions with double bass, and a handful of those majestic melodies that dominated ...For Victory, and phone the whole fucking shebang in. That's Mercenary in a nutshell, the nadir of this band's career, and the first landmark in a decade plus span of mediocrity post ...For Victory that often has me questioning why so many hold the band up as some bastion of consistency. This is quite easily the least amount of effort they've exhibited on any full-length, with a fraction too much repetition of unworthy riffs, a vocal performance that is entirely dry and monotonous, drums that feel far too relaxed against the meatier rhythm guitar tone, and bass lines so disinterested and ineffectual that I very often forget they're even a part of the album. I can count the number of Mercenary's quality guitar progressions on my testicles, pre-orchidectomy.

One of these is in "Behind Enemy Lines", and the other is the central melody to "Power Burns", which is quite understandably a favorite among this track list. Yet even there the damn notes are repeated too often that it struggles to hold up. Elsewhere, the material fails to leave any impression on the conscience. Bolt Thrower were no strangers to incorporating slower, trudging chord and mute patterns into their tunes from as early as the first two records, but their they at least felt crushing, oppressive and visceral. The guitars in tracks like "Return from Chaos", "Laid to Waste" and "Zeroed" basically just sound like beefed up reruns of their older songs, with no memorable note sequences and a predilection towards boring accessibility. Snail paced grind for pub metal mules, and even when they get some half-assed momentum building, the riffs are continuously recycled, and it seems Mercenary is fresh out of ideas. Even the most 'death metal' moments on the album smack of the mid-90s mediocrity of what Six Feet Under and Obituary were releasing.

The lyrics are essentially also retread from themes the band had beaten to death; but while that was probably to be expected, Willetts might have at least delivered them with some punishing panache. It almost feels as if the band woke him up one morning while hungover, too disaffected to care, and had him record his lines regardless. 'Guys, do I have to do this right now? Aww, alright.' Mercenary would have sounded just as lackluster without him. Perhaps the one area in which the album doesn't completely fuck off is Ewan Davies production, if only because he pulls such punch from the limited palette of guitar riffs. Granted, the drums, bass and vocals are nothing at all to write home about, and the album by nature lacks the brightness of its predecessor, but it's certainly forceful when cranked through a decent pair of speakers. Unfortunately, the usual Bolt Thrower brawn here is betrayed by the dull songwriting, and they seem to have transformed temporarily into another casualty of the 90s. It's not the worst album I've heard from a death metal band of this period, but reeks mildly of contractual filler. No wonder Karl took off after this.