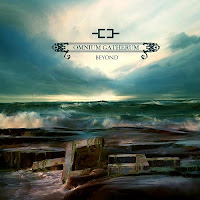 Though its cover might have traded the city skyline for a coastline, the latest Omnium Gatherum album Beyond is very much in the vein of its predecessor, New World Shadows. Trim, sleek, and produced with all the clarity of modern pop music, it represents a new entry into that field of metrosexual, metropolitan melodic death metal pioneered by efforts like Soilwork's Natural Born Chaos or In Flames' often maligned Reroute to Remain. The Finns are intensely focused through every second of this recording, from preening each note of every lead to attaining a perfect balance between the harder punch of the chugging rhythm guitars and brute vocals, and the various glazes of melody created by the synth playing and guitar harmonies.

Beyond is no doubt a concentrated, contemplative recording, given a breath of added variation through the use of clean vocals and cleaner guitars, but I was constantly being nagged by a sense of familiarity, of unnecessary precautions, and of a serious lack of anything interesting or new from a band that has been known in its career to occasionally change the parameters of its compositional style. If this were titled New World Shadows II: The Well Groomed, Less Adventurous Sequel, it would prove an all too fitting representation (or warning) of what the listener was about to encounter. Granted, that description does not preclude the possibility of some quality music, and there are moments throughout this album where the guitars, grunts and keyboards combine into a sublime, catchy experience (i.e. "New Dynamic" and "In the Rim"), but these are admittedly loaded more towards the front of the record. And at a near hour of material, there are just not enough of them, and Beyond inevitably becomes dull, or at best...'pleasant'.

Not a lot of energy here, so if you're expecting the bursts of enthusiastic hyper picked melodies that bands like At the Gates or In Flames evolved from a hybrid of the thrash, death and power metal genres, you'll only be treated to a few uptempo passages ("The Sonic Sign", etc). Vocals are the expectant huge, Finnish guttural originally made popular on records like Amorphis' Elegy or Sentenced Amok, and still used today by Omnium Gatherum's contemporaries Insomnium and Noumena. These function as intended in creating contrast against the more evocative friendliness of the guitars and keys, but there's nothing overtly passionate or creative in their expression. The singing voice is robust and manly where it appears, but the music it fronts is limp and uninspired, as with many of the more 'progressive rock' touches on the album that involve a clean guitar passage with some grooving, forgettable bass lines. The rhythm section is mixed to fluid perfection, with neither the drumming or bass ever losing focus on the central motifs of the melody, and yet there's just not a lot of excitement on the lower end.

But far and above the least compelling component of this album is the rhythm guitar, which only occasionally veers away from its placid, predictable bricklayer chugging progressions used to support the melody or the keyboard (or both). Granted, some degree of control is necessary when writing such accessible music, but I can't help but feel that some added complexity there would have saved the entire album from its sullen fate. I'm not entirely opposed to this niche of urbane, polished death metal where songwriting and melody entirely abolish the brutality of the parent genre. There's something both chilling and comforting about the music's sterile marble and glass surfaces, almost like the idealized metropolitan reality you'd experience in a modern car or corporate insurance advertisement. Cubicle metal for a coffee break at the local business district cafe on an overcast day. Substantial chance of showers. The personalized, observational tone of the lyrics helps enforce this internal imagery I feel when I listen to the songs, but certainly Omnium Gatherum can unleash itself far more than what I'm hearing on this outing.

It's strange, I've got a sort of 'on/off' relationship with these Finns' works. I've enjoyed all the odd numbered albums, but felt only a lukewarm response to the even numbered. This is the sixth album, so take that as you will. Honestly it's better than Years in Waste or The Redshift, two of their disappointments, but the amount of worthwhile material I'd desire to revisit here could fit tidily onto an EP-length release.