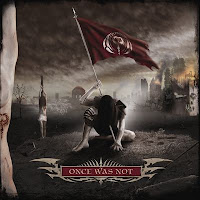 When it was finally hashed out that Lord Worm would be returning to his alma mater of atrocities, I'm sure a lot of people were silently praying for a None So Vile 2.0. That is not at all what happened, and the resulting Once Was Not is just as strange as anything else they've recorded, if not more so. But I have to hand it to Cryptopsy: I might not 'like' this album very much, but I admire their audacity to continue experimenting, and at least with this fifth disc, they didn't end up insulting anyone's intelligence as with the laughable And Then You'll Beg. Once Was Not is more or less a joyless attempt at creating an avant-garde death metal record not unlike Gorguts' Obscura. It's not entirely sure what it wants to be, and I felt like the latter half of the record proved far more compelling than the former, but at least it's conceptually and musically more coherent than its predecessor, and it bravely fuses influences from other niches into the core Cryptopsy aesthetics, without totally screwing the pooch.

Although Jon Levasseur contributed to the rather forgettable intro "Luminum", this was the one album in their catalog where it just wasn't his show. So the most overt mutation here is the boxier, drier guitar tone. Less saturated than prior albums, but it has a lot of rip and zip to it when Alex Auburn is flying up and down the frets.When compiled into a trudging, jarring or mechanically dissonant groove, the rhythm patterns often felt reminiscent of (proper) metalcore acts like Burnt by the Sun or Coalesce (like the chugging breakdown in "The Frantic Pace of Dying") which was something new to the Canadians, especially as its paired up with a lot of more traditional death metal riffing. Granted, a lot of the guitar progressions, especially in earlier cuts like "Carrionshine" or "In the Kingdom Where Everything Dies, the Sky is Mortal", are total dullards, regardless of how unhinged, dynamically varied, or slamming they become. The oddity of the songwriting doesn't necessarily work out in their favor, especially compared to something like Obscura which is so much more adept at 'getting it right'. As you move further into the track list, with cuts like "The Curse of the Great" or "The Pestilence That Walketh in Darkness (Psalm 91 - 5-8)", you start to hear more of that classic Crytopsy death propulsion arrive into the riffing selections, and it becomes far more interesting and effective, while retaining this arid production.

Arguably, "The Pestilence..." is the real standout on this album, because the airier sludge/Neurosis chord melodies really take you by surprise, especially with Worm barking his schizoid narrations. Speaking of whom, he was back in full ghastly splendor, weaving his interesting lyrics with the usual poetic license. His grueling barks and growls were still nothing incredibly interesting, but it's a landslide victory over DiSalvo on the fourth record, and his ability to pen titles and lyrics that immediately catch the imagination (more than the music) was very much missing from both Whisper Supremacy and its followup. I wish more bands would take such risks in this department, or just have Lord Worm write for them, because it's compelling to the degree that were I to rate this record on the prose alone, it would receive a far higher score. Yet, sadly, Cryptopsy would go down an entirely opposite route with the next album, investing in a more metalcore slash hardcore/personal sensibility which was rather a bummer. That said, I must admit that apart from his garish attempts to spew vomit and lumbricus terrestris all over the songs, his vocals were average.

Along with the guitar tone, the drums and bass here also took on a different tone than the earlier discs. Éric Langlois' playing remained dizzying and acrobatic, with lots of slappy and pluggy sounding rhythms, but it was a bit deeper in pitch and occasionally got lost under the rhythm/lead sequences, a shame because he's often performing something more interesting than that rhythm guitar. Mounier, who has long been the chief selling point for this band, is incorporated at monstrous levels of volume, his beats constantly crashing and colliding throughout the death, grind and -core progressions. His presence is always furious to the point of confusion, but this record is simply loaded with fills. In fact I often felt as if this was a batch of Flo Mounier drum solo recordings over which the rest of the band filled in riffs and lyrics. Sometimes, it's just a little too much, and while 'more' is the man's bread and butter, it's not necessarily 'better'. The leads, too, are a bit tactless and showy, Auburn tearing all over his strings with patterns that remind me at times of Pestilence and Nocturnus in their heydays, classical-fusion-infused; just not always catchy in the context of this music.

This is pretty goddamn experimental, all told. Tribal drums, funkier cleaner guitars, slight black metal textures in some of the more explosive riffing. Fuck, they've even got an exotic, hippie-like drum circle instrumental called "The End", all that's missing is a Ravi Shankar guest spot... For the first time, Cryptopsy are even incorporating orchestration, in the track "Angelskingarden" (what a title) with its sweeping, atmospheric synth intro and the choir tones coming in under the lead. No surprise, this is another of the gems inhabiting the later moments of the record. "Endless Cemetery" and "Keeping the Cadaver Dogs Busy" are also packed with ideas, if not the most memorable selections. One really has to wonder why the decision was made to open up with the least impressive material. It really sapped my interest level, but it does give Once Was Not the impression of a flower that slowly unfolds to keep hooking the listener along. Had the actual catchiness of the rhythm guitars remained constant, and the grooves less sodden and vapid, this might have been spectacular, even with its loud and lumbering production values. This is twice the record And Then You'll Beg was, but as it stands, Once Was Not is a collection of ideas not fully fleshed out. Fruits not borne to fruition.