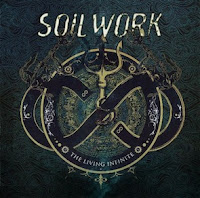 Soilwork's transition from decent At the Gates knock-off to something far more interesting has certainly made its enemies; probably due to the use of synthesizers, the chugging groove textures of many of the rhythm guitars, and Björn Strid's mixture of melodic vocals with Phil Anselmo meets Tomas Lindberg grunts and snarls. Probably also because of the disparity between what they can pull off in studio versus on the stage. Plus, let's face it: they rose up alongside bands like Killswitch Engage and In Flames. They tour everywhere. They are relatively popular with a fanbase broader than the average underground pundit is comfortable with, and many of their aesthetic choices are not exactly popular. All of this adds up to an unmistakable bullseye upon Speed's shaven crown, the shrapnel from the ensuing blast consuming his band mates. But even at their worst, I've almost always been able to take Soilwork seriously, because I find there's an immeasurable level of talent here that, when firing off at full force, provides sheer exhilaration. Translation: Natural Born Chaos. It happened, I loved the fucking thing, and it might damn well happen again...

Ounce for ounce, The Living Infinite is not that Second Coming, but it's a damned ambitious double album which serves up some compensation for the last 3-4 records, none of which I found terrible, but all of which left something to be desired. At 20 tracks and about 84 minutes, there is a lot happening through the course of this music which deserves exploring, and I'd hazard that the Swedes even take a few risks to maintain the variation and discourse necessary to hold a listener's attention. At its core, the structure of the music is not a left turn from the past decade's output, and there are a few pretty bland chord progressions and palm mute patterns, but for the most part, they do everything in their power to keep things creative on a fundamental level. The tracks twist and turn, rarely predictable, reaching out not only for those money shot choruses, but also implementing some choppy rhythm guitars during the verses which grant us something other than Strid's rifling rasp for us to follow. Leads and glimmering walls of melody will break out at any time, often even as a support for the vocal chorus, while the drums are reduced to a minimal beat that generates an atmospheric breakdown. You'll hear hints of everything from prog rock, to Southern swagger (in a few of the grooves), to straight up bursts of classic Soilwork melodeath, even some thrashier outbreaks like "Let the First Wave Rise' which reminded me quite a lot of Speed's side project Terror 2000.

And yet, for all the dynamic wealth of the album, it remains steadfastly consistent. Strid's voice is on the top of his game, as he further refines his ability to deliver a melodic line with just a hint of the razor's edge to manifest raw emotion. Normally, I admit that I loathe a lot of the clean/bark alternations found in groups of the melodeath or metalcore persuasion. I can't always stomach them in Shadow's Fall, All That Remains, Bring Me the Horizon, Atreyu, or whatever the hell else is/was popular among the fashion-core. But for whatever reason, I tend to enjoy it in this band; perhaps it just feels like the inherent emotion is coming from a more authentic place. I've also long enjoyed the presence of keys here. Sven Karlsson adds everything from proggish runs to organs while remaining unobtrusive to the pummeling of the rhythm section or the frantic front man. Soilwork have long bolstered appreciable, modern production jobs, but this album doesn't feel quite so clean or brickwalled as the few before it. Perhaps it's just the better interchange of the drums and the airy discharge of the melodies, or the fact that every single instrument, including Old Flink's bass lines, come across so distinctly; each fits snugly into the overall picture, the puzzle that might descend into clamor if the focus and attention to detail weren't so obvious.

The Living Infinite is not perfect, and it's not one of Soilwork's very best outings. Part of this is that the sheer magnitude of material seems to trend towards a lot of 'strong' songs as opposed to a few great ones. Also, for all the countless riffs being wound through the songs, they seem to rely more on remaining busy and not repeating themselves than really delivering the memorable hooks. Thus, a lot of that load is left on Strid's shoulders, and while he delivers some climactic chorus lines in numbers like "Tongue", "This Momentary Bliss", or "Whispers and Lights", they unfortunately don't stand out for very long afterwards. I should point out that this is not an album which really attempts to pad itself out with filler. There are a few diversions, like the instrumental "Loyal Shadow", but in general it's quite consistent. A lot of care and effort went into the construction of this thing, and even though it largely plays out like a tribute to the last decade or so of the band's progression, from Natural Born Chaos to the softer Stabbing the Drama, the sheer amount of details here lend it some replay value. Granted, it's not likely to change the mind of anyone with an established enmity for the Soilwork style, but I definitely enjoyed this more than records like Figure Number Five, The Panic Broadcast, or Sworn to a Great Divide at any rate.