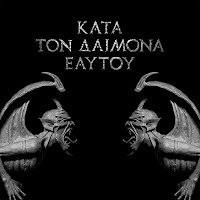 Early previews of this album did not yield much excitement for me, as it seemed like a formulaic continuation of Rotting Christ's last album, which was heavily invested in symphonics and atmosphere. I did enjoy Aeolo well enough, but what I was hearing on the newer samples was like a watering down, with a lot of baseline chugging riffs or the usual staccato picked sequences the band has been employing quite often across the last decade. There was also the incredibly lazy cover art... Granted, they haven't been strong in this department since the 90s, but this is by far the worst in their history; nothing more than a mirroring of some gargoyle's image with the bland album title text. Seriously, I don't know if the idea here was 'minimalism', but fuck that, dudes! You guys have a great logo: show it off. Nothing wrong with a little 'branding', especially with such a strong history of consistently engaging output.

Unfortunately, after numerous listening cycles, my fears were confirmed: Κατά τον δαίμονα εαυτού ('True to His Own Spirit') is not exactly a poorly arranged or awful album by any means, but it's quite an uninspired mass of business as usual, in which the atmospherics take precedence over the memorability of the guitar progressions, and I can count the sum of its striking sequences on the fingers of one hand. Basically the band could be compared to a Hellenic version of Therion, with the deep and somnolent male choirs merged to the more melodic, flighty female guest vocalists, and the metallic rhythmic components all too simple, as if a bit of added innovation and complexity might not support the layers of synths and the half dozen members of the chorus. If the harmonies were particularly transfixing, I might forgive this, but alas they're just not all that special. I mean if I was to play Xena the Warrior Princess (who wants to be Gabrielle?), running around the verdant hills and pastures of New Zealand and making battle with fictional creatures and assassins, this has enough pomp and thrust to carry the day foe me. It's not an album in poor taste, but it just seems as if we've already been down this path, and while competent, Rotting Christ are not particularly great at it...

What they WERE, was a great GUITAR band, possessed of epic, glorious melodies on records like A Dead Poem, Triarchy of the Lost Lovers, lines that would stick in your head for years upon years. Even in their more arguably 'Goth' phase, Sleep of the Angels, they were writing some top notch tunes. Here, most of the melodies are slung along in typical fashion, whether through hammering patterns or simple, flowery lilting passages that add some delirium to the rifling rhythm structures. They do get a good punch to the guitar, which mixes lavishly against the choirs, barked vocals and orchestration, but apart from the bonus track "Welcome to Hel", which I thought was the best on the album, marginally hearkening back to their more majestic black metal stylings of the 90s, the rhythm guitars are little more than bedrock for whatever else is happening. Overall, I'd say the record has a pretty great mix. It's probably more polished than Non Serviam/Thy Mighty Contract nerds would be comfortable with, but with so much necessary to balance, it was the only approach worth taking. The drums sound great, and you can make out the bass lines, but the latter prove little more than a footnote applied by Sakis Tolis after his vocals, guitars and keyboards.

If there was one aspect I consistently admired, it's the 'worldliness' of the album's themes. One might be tricked into thinking this was some patriotic tribute to their Greek heritage, but in truth it explores a lot of historical and mythological cultures. You get occult lyrics in Latin ("Grandis Spiritus Diavolos"), a lovingly crafted upgrade to a Romanian traditional with fantastic pianos and female vocals ("Cine iubeşte şi lasă"), a voyage to the Mayan underworld ("In Yumen - Xibalba"), ancient Slavic demons ("Русалка"), and Sumerian epics ("Gilgameš"); hell, there is even a Voodoo track! It's like a tour of fascinating religious constructs of antiquity, and while Rotting Christ could probably write an entire, compelling record on any of these subjects, its sort of cool that they are sending them out as 'feelers'. Sadly, when set to such boring chord progressions as those around 2:30 in "Cine iubeşte şi lasă", the opening of "Grandis Spiritus Diavolos", or the wah wah in "Iwa Voodoo", I had zero expectations that anything interesting would occur, and for the most part, that held true. If you're looking to stir a bit of Therion or Hollenthon into your morning Aeolo, then this is surely your poison. But a few decent melodies and a passably exotic atmosphere do not always make for an ethnic metal masterpiece, and you can zip Κατά τον δαίμονα εαυτού into the evidence bag.

Verdict: Indifference [6.75/10] (welcome to my dark kingdom behind the sun)