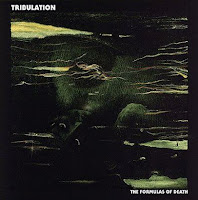 Endowed with what must be the year's most deliriously sarcastic album title, The Formulas of Death proves anything but. I'll be the the first to disagree with the prevailing notion I've encountered that Tribulation has somehow transformed from a prime example of the 'standard Swedish retro death' sound to something far more artistic, because even a cursory listen through their fantastic debut The Horror reveals a higher thrashing potency, with some of the most explosively entertaining leads in the field. Clearly this wasn't your typical, dime a dozen knockoff of Entombed or Dismember, thriving only on second rate D-beat death punk riffage and Clandestine production standards, but a truly memorable collection of songs that transcended the status quo. One of the better albums of 2009, in fact, which is saying a lot, since in my estimation, that was one of the most 'loaded' years of quality metal I can recount since the late 80s. Particularly in the more extreme categories.

With that said, The Formulas of Death is surely a major transformation for a band so early along its career trajectory. We are talking Darkthrone or Ulver proportions of disparity from debut to sophomore effort. I can recognize certain core characteristics that have been carried through from the one to the other: Johannes Andersson's treacherous, bloody barking vocal isn't a far cry from its original form, and the band's tendency to strafe the border between death and primeval thrash metal in both their groovier mid paced chops and the more rapid guitar runs is still pulsing through the music's veins. Yet the external, atmospheric shell crafted over the 76 minutes of material that is The Formulas of Death is so prevalent that it soaks itself deeper into the cell lining of the quartet's metallic entrails. Tribulation have essentially created a psychedelic, progressive death metal mirror universe in which they explore worldly occult themes across a variety of cultures and subjects, while ramping up their already impressive musicianship. In fact, thus far in 2013, I have not heard an album with so much ambition; so much instrumental proficiency. Not that the songs are the most technical, or polyrhythmic out there, as you might find in jazz-influenced brutal death metal or math metal shredding...

...but there is this immense sense of fulfillment, no shortage of ideas careening through this opus which will stand out to the ear of someone looking for metal that can balance riffing against atmosphere. The most obvious new ingredient to the Tribulation repertoire is the implementation of a myriad of cleaner guitars. Often they'll resemble 60s psychedelic folk, fit for a traipse across a maudlin meadowland with a slight complement of Eastern strings ("Vagina Dentata"). Elsewhere they are spry and spooky, to saturate the compositions with a tinge of occult horror ("When the Sky is Black With Devils"). The lion's share of the material is still driven by heavier guitars, but even there we get a considerable expansion of technique. Loads of droning, atonal ringing notes that drift out into a greenish/black mental fog. Muddier cleans. Dextrous clips of melodic picking sequences which sound like speed exercises being imbued into harder driving rhythms more redolent of their last album. In addition, the distortion levels have been dialed back for greater clarity. There is no shortage of guitar effects, but the rhythms are really clean and blunt, where they had a lot harsher hiss trailing behind them on The Horror.

The rhythm section here is like a dream. The bass lines are pendulous and polished, swaying and swaggering  into various grooves that evoke distant memories of dreamy prog rock or swirling pop records from the 70s and earlier. Then they'll turn right around and surge into the metal like a bong-ripping Steve Harris. Beats are incredibly well managed, and play a vital role in steering the versatility of the guitars. For example, a slow and steady cadence is used to set up the opener "Vagina Dentata" into a march-like piece reminiscent of what Metallica might have written in the 80s. The kick and snare are directly up front, and the fills and cymbal crashes constantly audible, which becomes even more obvious when they erupt into a more traditional blast sequence like in "Spell". Vocally, there is less evolution, but as you find yourself drifting through this 'cosm of nuance and nightmare, you'll hear some airier, eerie clean tones shimmering against the rhythms, like ghosts attempting to cross dimensions and faintly manifesting themselves from their natural incorporeality. There is always something waiting around every corner, under every eave...it's a busy and consistent arrangement.

It's definitely a difficult task to pinpoint shortcomings in such a lengthy work as this, but that's actually one of its few problems: The Formulas of Death feels overlong by a good 15-20 minutes. Not to say that it falls into a slump of needless repetition or runs short on imagination, but in listening straight through the track order, there were several points at which I felt I had reached some natural conclusion, only to have the next track kick into view. There are enough ideas here to fuel two or more albums from lesser bands, but not all the material is necessarily sticky beyond just its sense of novelty and refreshment. In listening, I felt almost as if I were salivating at some buffet table of tasty if not delicious fare, with a stomach that was already half fulls. Frankly, the harsh vocals and a lot of the heavier guitar progressions just weren't interesting or varied enough over the full 75-76 minutes to keep it entirely compelling. 'Busy' simply doesn't always translate into 'catchy'. The more I listened through, the more frustrated I became that a sizable portion of the music was more able and moody than memorable.

Lastly, though comparing this to The Horror is like comparing Dark Side of the Moon to a sole twelve-bar blues guitarist being rafted through a swamp, the debut was a more engaging and exhilarating burst of tunes with a lot of bite. You weren't coming away from tracks like "Beyond the Horror" or "Curse of Resurrection" without fang punctures on your neck in a best case scenario, tagged and bagged in the worst. Here, much of the dingy and adventurous atmosphere just does not feel as morbid or haunting as the album's occult themes would imply. I was creeped out a few times, but a lot of the riff progressions feel too consonant or ethereal to evoke the boogeyman. Don't get me wrong, this is ultimately an impressive, otherworldly album that will no doubt have people shitting themselves at its level of aesthetic vision and musicianship. Its sure to stun fans of progressive black metal and psychedelic doom just as much as it asserts new ideas into a stagnating spectrum of death metal nostalgia. Almost like a more complex and atmospheric response to last year's s/t sophomore from another Swedish band, Necrovation. Worth owning, or at the very least checking out, and overflowing with creativity; but once in a while the excess spillage dries out a little too quickly.