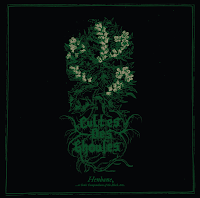 Horror. Despite the best of intentions, it's a lot harder than you would think to evoke within the realm of music. Even metal music. I can't count how many records attempt to sound morbid and threatening but miss the mark on the sheer grounds that they've got no thought placed into their construction, no balance of atmosphere and riffing, or such a sterile and brickwalled production that they have no impact other than the technicality of their riffing. Slasher flick samples and misogynistic lyrics just aren't gonna cut it, folks. Within black metal, the problem is one of too many cooks in the kitchen copying one anothers' recipes without understanding the baseline inspiration of the very best. The same Anti-Christian lyrics, the same riffs, the same blast beats, and the same imagery can only be evoked so many times before they lose their 'edge', and many would argue that the once sharpened spikes of this niche became blunted long ago.

Well, Cultes des Ghoules of Poland are a band that understands the notion of horror all too well, and it permeates...suffuses every second of their sophomore outing Henbane. Despite its comparable atmospheric cultivation and a marginal appreciation for its back-to-basics black metal, I actually was not a fan of their 2008 effort Häxan, but its successor manages to iron out nearly every flaw. This is a daunting, mesmeric experience with a lot of character, a lot of surprises, twists and turns and corners from which leering specters might leap out and feast upon you. Chief among these is the vocalist 'Mark of the Devil', whose panoply of decrepit snarls and growls will haunt you in ways that few others are capable: maybe Attila Csihar, perhaps It (ex-Abruptum), but this guy is a nightmare given throat. Coupled with the male choir chants, organs, bells and other percussion arrangements, he manifests a ritual appeal to the album which is the metallic equivalent of a morgue full of corpses suddenly stiffening up to a seated position and having a group conversation. This was already a component of their earlier material, but here it's got so much more breadth, depth and schizoid dementia than I would have expected, and it would sell the music by itself...

Fortunately, it doesn't have to, because the music is also up to the task. One of my gripes about the debut was that the riffing progressions often felt a little too basal or mundane to really match the atmospherics, but with Henbane they've ramped up this aspect of the writing so there's an added level of texture and nuance. I still felt as if some sequences were excessively repetitive, which is to be expected with track lists that are generally eclipsing 10 minutes (some closer to 13-14), but there's a staggering variety to this material which more then makes up for a few unnecessary added cycles. You've got some straight, traditional tremolo pick permutations through pieces like "Idylls of the Chosen Damned", but quite a lot of solemn, blackened doom grooves that represent most of the more catchy moments of pieces like "The Devil Intimate" and the heavily ritualistic "Vintage Black Magic". The rhythm guitar is dowsed in this raunchy, beautiful fuzz which gives Henbane a primacy that relates it back to the early 90s and the dawning of this genre, but the bass is also quite fluid and flowing, the drums crashing along with a plenitude of fills and samples that help round out the compositions with a live feeling, like you were listening through this in some walled-in outdoor garden where the titular, psychoactive herb is grown in secrecy.

There's a particular, unnatural reaction I had to this music which I've traditionally only had when viewing some understated masterpiece of dark film and fiction. Nosferatu. The Seventh Seal. The original Wicker Man. Hammer Horror. Argento or Fulci. Lovecraft. Stoker. William Hope Hodgson. Arthur Machen. We're not talking cheap thrills, a knife in the dark, Freddy Kruger bullshit, or Paranormal Activity airheads. No, this is a tangible, spiritually draining experience which taps into the listener, overrides its survival instincts and then drags he or she towards its maw. A vast, vampiric insect building its web. It utterly destroys the band's debut, and most everything else I've heard lately. In fact, this is such a well-rationed amalgamation of the refreshing and archaic that I can't think of much else like it. Perhaps the superb Head of the Demon debut is close, but Henbane is even denser with ideas. Mandatory, riveting and astonishing, an album I've come out of much different than when I went in...