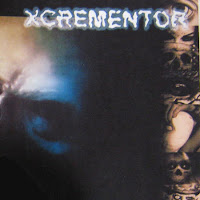 Colombia's no stranger to the field of extreme metal, what with a pretty solid brutal death metal scene emerging through the late 90s to the present day, but it was a lot easier to write off many of the bands of old as mere derivatives of groups from other scenes. Certainly a few acts like Internal Suffering were able to build a strong following, and rightly so, but recently I've begun to notice that brutal or tech death groups from a wealth of South American countries have begun to improve upon their songwriting in a way that reminds me of Poland's development, as spearheaded by groups like Vader. Strong chops and balanced rhythms are supplanting needless, monotonous excess, and it's a breath of fresh air. At the demo level, Medellín's XcrementoR proves an excellent example of the potential inherent to this evolving scene, and amidst a lot of sound-a-like old school death acts cashing in on the sounds of Incantation, Autopsy, Dismember and Entombed, this self-titled, 3 track introduction feels just different enough to stand out.

XcrementoR is not entirely without precedent, it's just that the influences they put together here are not the sort I experience on a daily basis. Imagine Consuming Impulse/Testimony of the Ancients era Pestilence being merged with the first few Immolation discs (or pre-Obscura Gorguts). Swerving, jerking grooves bisected with ominous octave chord slides, creating an oppressive and suffocating atmosphere. Loaded, voluminous fills that collapse and arise from driving beats, double bass barrages. Murky but acrobatic bass guitar lines that never settle for just aping the rhythm guitar, and spikes of well-constructed, emotional leads and melodies that transform from a one-dimensional asylum rampage into something better rounded, more fulfilling, a fairly complete death metal experience. Add to these the clamorous, guttural garbles and you've got a menacing 12 minutes of material that should quite easily place XcrementoR on the radar of old school death metal mavens internationally. But even better, tracks like "Larvas" or their eponymous "XrementoR" prove that the Colombians aren't just moored in the past, but actively attempting to manifest some means of progression...I never though of these songs as looking backwards.

As for its production, this demo is also rather impressive, sure to turn a few label heads if they can get this out there. The guitars are flexible and vibrant, deep and choppy without stealing away any fire from the other elements. While a fraction loud, the vocal enunciation also fails to drown out the rhythm section, and both the drums and bass are painstakingly balanced so you can hook into just about every groove. I wouldn't say that most of the individual riffing patterns summoned forth are all that mesmerizing when plucked apart from the whole of the demo, but as a unified force they project enough kinetic variation and energy that there's just no chance at all to feel bored or underwhelmed. A little more atmosphere wouldn't kill them, and there's a way to go in terms of memorability, but otherwise, XcrementoR has got itself a rather smashing demo here. Fans of Corpsegrinder-era Cannibal Corpse, 90s Morbid Angel, Immolation, the first Pestilence reunion Resurrection Macabre or other more recent fare like Nocturnal Torment's They Come at Night and Skeletal Remains' Beyond the Flesh should track this down.