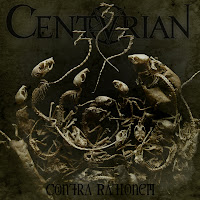 Well over a decade ago, Centvrian was another of those death metal hopefuls which might very well have been caught up in the same storm of notoriety that made Krisiun, Angelcorpse and Nile forerunners in the field of brutality. Alas, for whatever reason, the wells of hellish inspiration ran dry after but two full-length recordings, and several of the members walked the plank, while others splintered off into the related Nox who had a comparable sound. Most of the core group has kept busy with other acts like Severe Torture and Prostitute Disfigurement, but after a few successful live gigs in 2011, plans were made to once more make a go out of this defunct project. We can all be thankful of that, because not only does Contra Rationem trample its predecessors, but it ultimately amounts to a pretty fresh sound for blast-focused extremity that overcomes the usual limitations.

Intricate riffing is key to this experience, and the prime factor in elevating the effort above so many of its robot-drone contemporaries, who seem to think the sheer speed and force alone are paramount to the procreation of great musical vision. Centuvrian mete out wild rhythmic patterns that you simply don't expect, and to my great delight, they were the sorts that I instantly wanted to figure out. For instance, in "Crown of Bones" they carve out the usual tremolo picking with these excellent, grooving chord patterns, and a toss up a few spikes of black metal dissonance for good measure. The sheer speed of the rhythm guitar across many of the cuts, and the tone thereof, will evoke nostalgia for Morbid Angel's Altars of Madness, and I had a similar reaction to its controlled, calamitous construction; lightspeed thrashing evolved into something altogether more brutal and bristling with menace. But Contra Rationem puts a creative spin on it, its authors intent on not only technicality, but licks that will actually dazzle the listener into wanting to relive them repeatedly. The leads, too, show an enormous level of detail, zipping and zapping through cuts like "Judas Among Twelve" like a swarm of insects discovering some new feasting ground.

To their credit, though so much of the album is performed at rippling velocity, they can also manage a few mid or slower paced chord progressions (like the intro to "Damnatio Memoriea") to dispense with any sense of unbridled monotony. The drums are blindingly dextrous, but Centvrian has gone with a more organic production than many of today's modern, mechanical sounding brutal/technical death acts, and the result is definitely one of a Sandoval on steroids rather than an obvious panorama of brickwalled overdubs. Bass is fast as fuck too, but suborned slightly by the boxy guitar tone. I wasn't entirely blown over by the new vocalist, Niels Adams (who several of the other members have worked with before), but largely because he just sounds like a Steve Tucker or Glen Benton, a blunt and dark inflection with a few snarls thrown in to add texture. Granted, he performs this style well enough, but the guitars and drums are just too obviously the focus, and responsible for almost all of the memorable moments throughout (apart from some brief sample snippets like the intro to "Antinomium"). Taken as a whole, Contra Rationem is not simply just a band dusting itself off, but exceeding all expectations. A veritable death metal whirlwind that should find an audience with fans of Krisiun, Behemoth, or anything Morbid Angel released from 1989-2000.