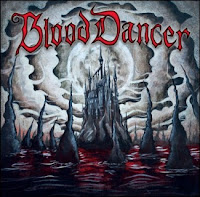 It's almost unthinkable that an unsigned band could record an album like the eponymous Blood Dancer debut, at their own home studio with no outside interference, and result in a product which is not only competent and professional, but frankly superior to a great deal of the traditional heavy and power metal you'll hear coming from groups with 20+ years of experience behind them. Not that this experience is without a few faults of its own, but by and large these Californians have created a collection of tunes here that should easily see them signed and delivered to a broader audience than what might be capable on their own. Jump on this bandwagon now, power/battle metal fans, because if there's any justice left in the world, you'll be hearing a lot more from the quintet.

This is a band with a passion for history, in particular the enmity between pagan cultures and the emergent Christian tidal wave of centuries past, and thus the lyrics here focus on atavistic Norse berserker imagery which is more than a little idealized, but yet carries a poignant message nonetheless. These are stories of futility in the face of a rising power, pride in oneself and one's people, messages we pasty post-Europeans just aren't encouraged to explore in our modern era of globalism. There's no real 'side-taking', per se, but Blood Dancer are clearly providing a pure heavy metal alternative for something like Amon Amarth. The keys to this particular kingdom are clasped firmly in the hands of the Barclay brothers, one of whom is the lead guitarist (Cory) and the other (Christopher) the vocalist, but they're supported by a trio of rhythm musicians who can follow them (or at times, steer them) just about everywhere. On the whole, I found Blood Dancer's shorter tracks like "Death to the Saints" and "Heralds of War" a fraction more memorable than the more epic overtures "Palace of Bones" and "Last Stand of the Pagan Kings", but I've got to hand it to them: they don't artificially inflate their music. The longer the piece, the more epic and varied it becomes.

Christopher Barclay's voice is a central selling point, a higher pitched, knife edged tone borne of a crystal clarity that will draw some obvious comparisons to Joachim Cans of HammerFall. He's very proficient at maintaining pitch, but thankfully he's also not above the incorporation of a few snarls, growls that help to vary up the delivery of the lyrics; which he's actually pretty good at, and which mirrors the band as a whole's admitted influence by extreme metal acts just as much as the usual suspects like Iron Maiden, Dio, etc. The one caveat for me was that, as this album is laid out in a very prose-heavy, narrative fashion, like a cheap historical novel, Barclay's voice and a few of the lines often clashed to create a few moments of unintentional humor, and I think this is just a matter of choosing your battles, which will come with more experience. In truth, there were points here in which I wish he actually implemented more of his growls and screams, because I just find them a little more relevant to the religious/cultural warfare concept. It's hard to pull off anger when you sing like an angel, and since the guy's got the pipes for the opposite, I'd love to hear more. But as it stands, he's quite good, and the warmer vocal harmonies used through the album are also very well balanced to provide that extra level of escapism.

As for the guitars, they're immediately catchy throughout much of the 39 minute playing time, with oodles of blazing harmonic leads, and classic riffing sequences in the rhythm guitars that recall a host of traditional NWOBHM and modern power metal (from Saxon and Maiden to Powerwolf and HammerFall). Once in a while, they'll put together a pretty bland, predictable, done-to-death-already chord progression as in "Death to the Saints", but to their credit they really dress this up with some busier tremolo picked melodies reminiscent of a band like Gamma Ray. The versatility is obvious, from thundering march-like palm mute breakdowns to airier expanses of open chords, from rushes of Running Wild intensity, to cleaner and extremely catchy tones and progressions like the intro to "Herald of War". Leads are competent here, never exceedingly flashy, paced and placed craftily, but ultimately not too distinct or memorable against the wider field of related acts spanning decades.

The rhythm section is decently represented in the mix, with a thick and oozing depth of bass that contrasts the brighter guitars, and a nice level of crash to the cymbals and snare, though these could at times be a little louder against the bulk of the rhythm guitar. They also implement some synthesizer strikes here or there which contribute to the idealized grandeur and antiquity of their theme, and show here that they've got a capacity for composing sweeping orchestral intros ("Ream of the Blood Dancer") or lush acoustic interludes ("Discourse of the Soul") which are fully flush with the more raging metallic anthems. All in all, the San Diego act has given itself quite a kick start with this album, showcasing most of the strengths fans of this style demand, to the point they don't at all come across as amateurs; yet still have plenty of room to develop in the future. Fans of other US acts like Twisted Tower Dire and Visigoth, or classic European heavy/power legends from the 80s through today will swallow this like golden mead, and Blood Dancer would sit very well on the roster of a label like Stormspell or Metal on Metal. Will I find myself returning repeatedly to this album in six months or a year? Perhaps not, but it's beyond solid in the meantime.