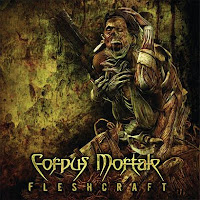 I'm not sure what it is about Danish metal that renders it beneath other scenes in terms of international impact, but who could deny the strength that groups like Exmortem, Invocator and Panzerchrist have exuded through the years? Corpus Mortale is another name I could kick around with that lot, and a band who have impressed me time and time again with records like Spiritism (1998) or A New Species of Deviant (2007). FleshCraft is their fourth, and latest long player, and once again the band exhibits a professionalism and tautness of performance that you're generally only going to find with such a seasoned squad; I can't cite that they've got the most unique style going in the field, and in fact there are points at which this album sounds painstakingly similar to so many others like it, but the swarthy production, songwriting and in-your-face brutality are difficult to ignore.

Right up front, the guitars have an enormous level of punch to them which translates very cleanly into the more intricate details of the picking. Clinical, balanced chugging that not once through the 41 minutes of content every becomes tired or nonchalant. Murderous low-end trills redolent of old Cannibal Corpse, compact and mechanical grooves not unlike Pestilence (Resurrection Macabre), and strutting palm mute sequences that were once a trademark of the great Morbid Angel in better days. The drumming is as tight as an untapped fuckhole, with machine gunnery double bass and precision snares so meticulous that it rarely feels like a human is being the kit (though there is one, Rasmus Schmidt). Bass guitar is corpulent, though it does sit beneath the muscle of the guitars a bit much in the mix, and rarely exemplifies itself outside of stunts like the intro to "Love Lies Bleeding"; but Martin Rosendahl has always been a bit of a Martin van Drunen in this respect: his vocals are the stronger of his instruments, and here they're a blunt hammer being dropped on the listener's spine in pendulous punctuation, a brute and broad guttural that hits every bit as hard as the guitar tone. Sort of a thuggish approximation of Chris Barnes, Patrick Mameli and Oliver Jauch (formerly of Germans Obscenity).

This being said, once I strip away the potency and polish of FleshCraft's production, and the unflinching sense of musicianship and energy that courses through the 10 tracks here, I must admit I found the album a little less appealing. Though harried and intense, there's just not much subtlety happening anywhere. The riffs really wear their boldness on their sleeves, and there's never any menacing aural subtext. Brutal, but never evil. The muscle of the mix is likely to win over a number of listeners through sheer impact, but a deeper examination of the guitar licks reveals little interesting that I haven't heard off a dozen other albums. It lacks some of the primordial charm of its own ancestors, in particular Spiritism where the vocals were more fun, or A New Species of Deviant which had a slightly more interesting riff-set and dirtier tone. FleshCraft is a studio marvel, broader and busier and more bruising than the Danes' backlog, but sometimes even the hardest hitting mallet might only graze a rib or bone, and not crush it, and despite numerous listens, the songs here just didn't stick around my skull after banging on it. Not a bad album by a long shot, just a smidgeon forgettable.