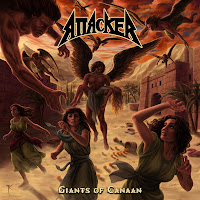 Attacker is probably still best known for its cult classic 1985 debut Battle at Helm's Deep, a fine slab of USPM released through Metal Blade records in its formative years. But they've put out a number of decent follow-ups through the years, both before and after their 2001 reunion, and if there's any justice, Giants of Canaan will cement their underground following and spin a lot more heads. The reason being that this is hands down their riffiest construction, through all 10 of the metal tracks, and it culls a number of American and British influences into the core sound they helped create, to produce one of the better USPM efforts I've heard in years (outside of Pharaoh). After being sent the promo through Metal on Metal Records, I've been unable to stop listening to it, and aside from a few minor hiccups in terms of cheesy lyrical delivery, it's a nearly spotless example of its medium, a level of power metal finesse which I'm just not hearing much of in the world lately.

This is a pretty humble effort, all told, with lyrics rooted heavily in historical battles (The Crusades, for example) and stylistically does not deviate heavily from the band's prior work. But humble in this case just happens to = an ass kicking. The busied, winding, classically infused guitar picking is no doubt going to draw a few comparisons to another US act, Helstar, who were writing like this back on A Distant Thunder or Nosferatu in the later 80s; truly more expressive, melodic and well-developed than anything this band has released before. The sheer variety and quality of the riffs was the major selling point for me, loads of dual harmonies that fire straight into the memory, rooted in angry ballast and momentum. The one track that I wasn't immediately hooked on was "Giants of Canaan" itself, but it definitely has a cultural feel to its construction which sets up the mood of the lyrical concepts, and I came around after a few spins. That said,  beginning with "Trapped in Black" the album was this golden swath of gleaming, catchy battle hymns through which I couldn't find more than a 30 stretch without something ear pleasing coming off those guitar strings. Leads are mixed, with a few totally evocative and brilliant progressions interspersed with less interesting note explosions, but overall I'd say Pat Marinelli and Mike Benetatos earned a goddamn beer (and in a perfect world, more than a paycheck).

The bass tone provides an essential, dense anchor for the crisper rhythm guitars, and long term member Mike Sabatini is also pretty spot on, though I'd say the percussion could have been mixed at a slightly higher volume and we'd not have lost those guitars. The symphonic/ambient intro "As They Descend" does a great job of transporting the listener into an idealized Middle Eastern desert, where important (and bloody) things are obviously going to happen; the one caveat is that I wish there were more of these purely atmospheric moments spread throughout. New vocalist Bobby 'Leather Lungs' Lucas, formerly of Seven Witches fame, fits in here like a knight's fist to a gauntlet, capable of delivering in both a vicious, convincing mid-range and a higher pitch. A lot of people will compare him to James Rivera, but I also heard a lot of angrier Bruce Dickinson, as well as some Halford, Dio or Wayne through the shrieks. Often quite similar to what you'd hear from Sean Peck (of the Californian band Cage). Most importantly, Lucas is able to produce some vitriol in the verses, essential to really place one in the mood of such bloody, epic struggle that inspired the songs. He's not just some harmonic dandelion singing about elves, eagles and Pegasus. This man might really BE the guy at the other end of the scimitar or broadsword plunged into your chest.

The downside is that a few of the lines come off really hammy, especially in a tune like "Sands of Time" which serves as a paean to metal music and thus metal stereotypes ('rock and roll soldiers', etc). Or a few of the 'hwah' type exclamations that music of this caliber just won't need to stir up the listener's blood. Granted, I'm nitpicking, and these are only a few lines throughout the entire 51 minutes of material. Their scarcity did inversely cause them to stand out, but let's not lose focus: Leather Lungs is a tremendous talent and a suitable front man to replace long time screamer Bob Mitchell. With this guy at the helm, and such a seasoned and excellent quartet of musicians to back him, Attacker has easily written one of the best albums of this sort I've heard since the 80s, and the intricacy, complexity, and quality of the guitar licks can't be denied. In fact, if I were to stand this up shoulder to shoulder against the group's beloved debut, Giants of Canaan would come out the victor, because there's simply that much more to it, which is not always a good thing, but here nothing less than a benefit. Fucking great record here, whether your tastes lie in USPM, NWOBHM of the Maiden variety, or the Teutonic surge of a Gamma Ray or Primal Fear.