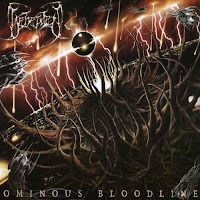 Hardly a departure from the direction Beheaded were pursuing with the two previous releases, Ominous Bloodline succeeds because of two important factors: a stronger sense of purpose and punishment to the songwriting which is manifest through a bevy of superior riffing, and a deeper, darker production standard which encapsulates the guttural, often gurgling vocals, courtesy of Melchior Borg, the vocalist coming in to replace Lawrence Joyce. I won't lie, this is essentially Recounts of Disembodiment 'in space', done right, and dutifully and mercilessly kicking the shit out of you. Perhaps it's just the excellent cover art, or the opacity of the music's mechanical intensity, but listening through this disc was like being in a space vessel as it was being swallowed by a black hole (or Elder God, if that's your thing), shaking to pieces while the rest of the crew around you bursts into an abstract sculpture of blood and organs. Resurgence of Oblivion and Recounts of Disembodiment failed to even place me in a proper headlock, but Ominous Bloodline thrusts me down on the block and proceeds with a single, savage stroke to separate my brain cage from the rest of my body.

Mind you, there's nothing particularly novel or unique about the album in terms of its techniques. Choppy semi-technical spurts of rhythmic voracity infused with breakdowns circa Suffocation; tail end trilling guitar surgeries courtesy of Cannibal Corpse; callous, cold blasting redolent of Deeds of Flesh. But the pacing and balance of each track is more meticulous. The rhythm guitars have this processed punch to them that feels like you're bonked rapidly and repeatedly in the face with a wrench, and when they lapse into a groove you can really feel the weight of the mutes to the point where it becomes irresistible to resist the primal, pit starved neanderthal within. Imagine the primates pacing about the monolith in 2001: A Space Odyssey if they were to suddenly start moshing one another. The leads, too, are fare more skillfully elevated to give off a progressive, almost jazzy eloquence as they scream off into the vacuum of utter darkness, and the bass guitar thunders along like turbulence as you're entering the atmosphere of a dead, or dying world. I can certainly understand why some might find the snare drum too clappy sounding, and the drums do more or less give off a soulless, robotic impression, but the force of the kicks and the overall aesthetic actually work well with the vast, otherworldly horror of the music, a nihilistic intergalactic asylum.

The vocals, likewise, are an improvement over the previous record in that you can really feel out the brute soreness of the delivery. He's got a good, growling sustain, and there are plenty of snarls spackled over the density of the guttural to keep the performance schizophrenic and malevolent, or spatial effects (as in "Ill Remains") that enforce the dark, futuristic appeal of the writing (though the lyrics aren't necessarily sci-fi in nature). The selection of tremolo picked guitars here isn't necessarily more athletic or original than on Recounts, but it's certain set in a better contrast with the denser low notes and feels more freshly grating and hostile. Tracks like "Rooted in Profundity" or "Vaults of Ageless Pain" can certainly deliver a headache due to their potent, percussive construction, but all told I felt far more enthusiastic and engrossed in the material than ever before, even on the band's promising debut Perpetual Mockery which was an incarnation of the band as its most promising and unique. Ominous Bloodline isn't ultimately the most individual sounding record in the medium, and in terms of technicality or riff progression it's not as 'rocket science' as it looks, but it's nonetheless a damn fine brutal death record, and a pugilistic monument of escapism.