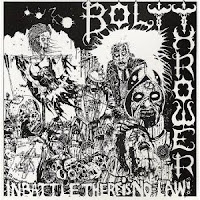 It would be almost impossible for me to think of Bolt Thrower's debut without also considering British extremity as a whole, or the process of how metal's evolution was devoured and regurgitated back and forth across the Atlantic Ocean, growing darker and heavier with each wave of new acts to don the genre and render it further inaccessible from its 70s roots. In Battle There is no Law! was one of a trinity of influential English albums to take on the emergent death metal medium, but it had some clear differences from its contemporaries Reek of Putrefaction and Scum! For one, where Carcass and Napalm Death were verily heavily expounding upon a punk and hardcore foundation, Coventry's carnal crusaders were more or less skipping that step and composing riffs that functioned off a thrash base. All three have been associated with the origin of 'grindcore', but rather than get into a tired semantic debate, I'll just state that In Battle... is easily the least imbued with that style's characteristics. The lyrical inspiration was also something else: rather than rallies against a corporate Earth, or medical grotesqueries privately intended to curb carnivores from their diet of flesh, Bolt Thrower, named for a weapon in Games Workshop's popular Warhammer 40K setting, had a fairly unhealthy obsession with, you guessed it, warfare. One that they've never shaken in over 25 years of existence.

Unlike its follow-up, Realm of Chaos, this debut doesn't necessarily delve into the the universe of that war gaming milieu, but focuses more on historical violence and the theoretical aftermath of civilization's plummet post-nuclear armageddon. And this is important, because it helps define what exactly made the band so standout and special to begin with: the atmosphere. In Battle There is No Law! is not the most righteously riffy of creations, granted, but it hits you on numerous visceral levels. For one, the tuning and timbre of the guitars is entirely oppressive and downtrodden, from the base thrash chugging structure to the roiling and fleshy grooves, Bolt Thrower simply did not sound like its US peers and death metal progenitors Death, Obituary, and Autopsy. The Brits were peddling more of a condensed flood of atrocity, and the debut never really lets up across its 30 minute play-length. Rather than creating eerie tremolo lines in their songs, they simply bashed the listener over the head with alternations of tank-tread grooves and accelerated processions of chords that almost seemed like a relentless upgrade to the speed/thrash metal sect (I hear a tint of Sodom or Hellhammer, certainly). Add to that the exertions of shredding solo here, either tapped or just wailing away on random strings of notes, and you get a pretty interesting contrast that only adds to the overall atmosphere, thanks to the unapologetic level of effects applied to the lead tone. Truthfully, there were probably only a half-dozen 'memorable' riffs on the whole of this disc, but this is so fucking heavy that it thrives off its nihilistic production regardless. Not a lot of other shit in 1988 can claim to have been this intense...

Whale's drums here incorporated scads of double-bass rhythms from the get-go, and this is likely the album's most prominent influence on the decades of death and grind since, not to mention the proto-blasting involved in tracks like "Challenge for Power" and "Concession of Pain". I've read comments about how the playing on this and the sophomore were 'sloppy', and perhaps that really is the case, but I think it's only amplified by the sheer volume of his beats, which sound like a few score mortars being fired off in conjunction. Transitions often feel a little random or misplaced through the tracks, but that doesn't do the music a disservice per se, only adds a bit of youthful chaos. Though the bass guitar itself is not the loudest ingredient, In Battle... as a whole definitely leaves a depth charge concussion on the soul and skull, and Jo Bench definitely laid out a proper, voluptuous low end which creeps beneath the meat of the rhythm guitar like carrion crawlers coming out to feast on the mounds of war-dead. Karl's vocals here are actually at their highest pitch through the band's career, one of the biggest dividers between this and the later Bolt Thrower albums. He's not got that same, brute guttural, but more of a bloody, bluntness that he intersperses with growls (closest comparison would be some of Chris Reifert's tormented mania). Certainly more of Karl's accent shines through than you'd expect. In a way, this is one of his more interesting and diversified performances, but I can see why some might have preferred the grimmer, streamline approach he'd take on later.

I have read other opinions of how In Battle There is No Law! is some sort of anomalous work in the band's catalog, and how it's aesthetically disparate from its successors, but I must disagree. Just about every aspect of the record forms a perfectly natural staging for Realm of Chaos, only there the band decided to go for an even bleaker sense of atmosphere, honing in for higher quality, drudging riffs and using the Games Workshop fiction as a direct lyrical source. It's arguably busier than most of the more condensed riff cycles they'd adorn later, but not hugely complex in structure. Overall, though, I'd say this immediately establishes the band's identity, the sophomore simply solidifies it. Unfortunately, Realm of Chaos does such an amazing job of manifesting its otherworldly, oppressive imagery into unforgettable songs, that given a choice, I'll seek that out for my Bolt Thrower fix 10 out of 10 times over this. That's hands down one of my favorite death metal recordings ever, despite In Battle There is No Law! being my first exposure. But I don't wanna sell this short, because it was quite impressive for its day, far more structured and compelling than Scum!, From Enslavement to Oblivion, or Reek of Putrefaction, and the punkish cover art and original 'logo' are both pretty iconic, even despite my preferences for Space Marines. Often more brash than brutal, but a gem all the same, and well worth hunting down if just to experience one of the death metal's formative sounds.