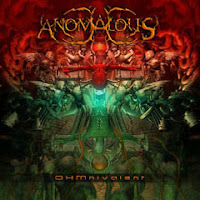 Even with five years of preparation and personal progression in the field of music as intense as technical death metal, it just doesn't seem plausible to transcend an experience as fitfully kinetic as Anomalous' 2006 EP Cognitive Dissonance. How do you play faster and harder and more intricately without becoming sort sort of gabber-blast-noise festooned in harmonies the likes of a sped-up tape reel? Much to my surprise, the Californians answered this question with their first proper full-length, Ohmnivalent, a half-decade of pent-up anxiety spewed out across 55 minutes of head-scratching confusion. Not only did the band ramp up its sense of pacing and structural density, but they also went for a more ominous, saturated production here that automatically imbued the music with a membrane of impermeability that wasn't quite present on its more clearly mixed predecessor.

Let me warn you up front: if you hate technical/brutal death metal, then this is basically the fuhrer of that particular regime, a work of such unimaginable rhythmic excess that only the word 'batshit' can come to mind to aptly describe its ballistic lattice of bouncing grooves, sporadic, twisted leads and accelerated clinical picking sequences that make a band like Theory in Practice feel like child's play in retrospect. Not that this is some wildly plucked sequence of beats and notes created only to generate a headache in the listener, as Anomalous always have a method to their madness. Accessible, warmer chord textures and hints of that jazzy climate I so enjoyed on the EP remain intact here, but almost like an Autechre of the extreme metal medium, they have absolutely no inclination to repeat themselves. Pop/rock song structures are about as alien to Ohmnivalent as a colony of ants to a passing celestial body. They throw a riff in your direction, it sticks around for a painfully short while, and then it's off to the races again. In some aspects, that does make the album feel like a clearing house of ideas which have been too compactly packed into an album to short to do them all justice; but to the Californians' credit, there are so many pleasurable melodies amidst the surge of beatings that it's not a journey I found entirely unwelcome.

Not the least of these is the mid-point instrumental, "Mitosis", an obvious spiritual successor to the track "Merged" which had appeared on Cognitive Dissonance. Here the instrumental form has been expanded into a nearly 9 minute behemoth, with flourishes of cleaner, tranquil guitars that support the phrasing of the more ambient lead; this time, also, they incorporate some jamming, jazzy percussion to create more of a variation. That said, I won't say this was quite as delightful as "Merged". One, because I expected them to do it again, and two, because I just didn't find the coordination of spatial notes to feel quite so fulfilling. That said, it's still a deserved break amongst the harder hitting neighbors, which possess an even broader range of techniques than the EP. Guitar tone is far swarthier in nature, for an added air of punitive damage, and this translates even to the richer, juicier timbre on the leads, which are legion and bound to pop up at just about any point in a given track. Seriously, much of Ohmnivalent plays out like Al Dimeola jamming with Cynic or Believer, and there's a natural, improvisational feel to the solos which will thrill fusion fans. That said, are they all so innovative or catchy that this spontaneous subtext works out in the album's favor? Not always.

Elsewhere, the use of drummer Marco Pitruzella here could only be seen as an improvement, not only because Anomalous is more aesthetically compelling than another super-tech death band he has played with (Brain Drill), but because that thicker, less robotic sense of percussive presence really lends itself well to the progressive/jazz underpinnings, especially in the toms, fills, and the near constant tempo transitions. On the other hand, the bass here was less impressive for me, not because it's not a capable performance but because the depth and tone just merges under the rhythm guitar a little closely for it to create distinction. I also wouldn't say Tim Hale's vocals have improved here, if anything they're a little blander, going for more of a constant, bloodied monotonous edge. Whispers, strange noise and other vocals appear beneath the burdensome rhythm sections, but ultimately the effect barrage of scientific and dystopian political imagery conveyed through the lyrics is more impressive than the front man's delivery of it. In the end, this and the other underwhelming elements actually hold back Ohmnivalent from reaching its full potential. A gajillion guitars meandering, colliding and contracting throughout over the brute skeleton of the drums, and a listen surely to bedazzle those interested in claustrophobic levels of instrumental proficiency (think Obscura or The Faceless with increased atomic density), but more or less a roller coaster ride without a great deal of resonant entertainment value.