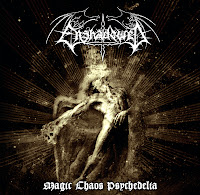 Another of the lesser known Greek black metal acts I encountered as I was covering that comprehensive Hellenic reviews project a few years back; Enshadowed released a pair of records earlier on in the 21st century which arrived with little fanfare and have since been all but forgotten. Both were decent if not exceptional outings, which suffered largely from a lack of distinction amongst a crowded European field, and the band went into a bit of a torpor, issuing only some split tracks in the ensuing decade. Now, they have returned for their third full-length Magic Chaos Psychedelia, the title of which hints at a possibly advance in atmospherics, but on listening to this, I was surprised at how little the band had changed at its core from Intensity...

Not that this would necessarily be a bad thing, but apart from the album's production, which is crisper and cleaner than anything I've hear of theirs in the past, this is hardly an advancement over what they were doing 10 years ago. Similar to Eschaton, Acherontus, and a handful of other Greek bands, Enshadowed do not chase after that same sense of cultural uniqueness and heavy metal influence that inspired their better known peers like Rotting Christ; rather this is more of what you'd expect from any number of Norwegian or Swedish acts from the 90s and beyond. Spikes of dissonant melody, overt death metal influences in the vocals and tremolo riffing progressions, and familiar, faster paced blasting sequences all recount veterans from Emperor and Marduk, who themselves often walked the line between the two extremities. The songs are admittedly choppy, with enough variation between them to keep the brain from falling asleep, and there were pieces here like "The Scenario" or "Surrealistic Shade of Color Black" where I was almost hearing a nice Morbid Angel strut to some of the riffing, but in general I wasn't too impressed with the guitars in terms of memorable developments.

Probably the most interesting piece was the closer, "Magic Chaos Psychedelia" itself, which featured some quivering female vocals and a more ethnic/tribal current amidst the slower, airier black/doom guitars, but it comes so late in the track list that you have to wonder how much more compelling the entire album might have proven with more such instances. The album has a very dry and present mix, exceptional in terms of clarity, and the performances of the musicians are all around tightly unleashed. In particular, the guitars really stand out with a lot of punch for their palm-muted impacts, and a lot of 'razor shine' to to the higher pitched atonal chord progressions. But the drums have a nice, compact, energetic ballast, and the bass guitar is decent if not outstanding. Serpent's rasping is nothing you wouldn't expect from a hundred other bands of similar tastes, but he does really feel out the inflection of his syllables with some added grind, and other snarls and growls are often layered in for a more dramatic, psychotic effect. Ultimately, as professional as this sounds, though, Magic Chaos Psychedelia just doesn't bring enough new or interesting to the table that I could highly recommend it; but if you're looking for more in the vein of European black or black/death with fairly high production standards (Marduk, Enthroned, 1349, etc) it wouldn't hurt to give this a chance.