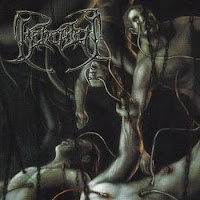 If it's any indicator as to just how dreadfully forgettable Beheaded's sophomore Recounts of Disembodiment is in the grand scheme of brutality, I had actually completely forgotten that it existed, and was beginning to put down my thoughts for its successor Ominous Bloodline when I had the nagging suspicion that I was missing something. From its formulaic songwriting framework to its use of one of Toshihiro Egawa's least impressive cover images, there's just nothing about this album that screams 'listen to me' over any number of other brutal death atrocities of the new millennium, and it suffers from a lot of the same symptoms that plagued its predecessor, the Resurgence of Oblivion EP. Not a total bust, and by no means a terrible record, but this one leaves the psychic impression of the 'also-ran' stamped upon its surface in so many places that any benefits one otherwise might have derived from the experience are smothered. In short, there's just nothing curious or compelling about Recounts of Disembodiment that I can't find elsewhere.

The writing here is occasionally as harried and fast-paced as the prior EP, but here they've settled into a lot of 4x chug/tremolo riff setups that feel soddenly generic and uninteresting when there are such a vaster array of dynamics available to such skilled musicians as Beheaded obviously are. If the note progressions were at least ear catching or 'evil' sounding, that might be one thing, but most of the structure to this album reminds me of textbook Deicide blueprints being filtered through a Suffocation lens. The palm muted slam grooves are a dime a dozen, without ever configuring into something truly violent, and the interspersion of these against the faster material is all too predictable and staged to sound like yet another of countless worship bands. Granted, there are a few tunes among the ten here that raise the stakes due a few superior grooves or old school death metal spurts which sound immediately more menacing than any of the by-the-numbers; "Consecrated Absurdities", "Compelling Derangement" and "Fed Upon Odium" all have a few moments of shine amidst the surrounding dullness, but even these don't engage the imagination for very long. The squeals of the guitars are generally a nuisance, and as with Resurgence..., I found the blunt and percussive vocals to remain on the monotonous side, though arguably more diverse in pattern than they had been on the EP.

A few of the leads are interesting, and lyrics remain a strong point for the Maltese, but in truth when I take this particular album and compare it to something by Deeds of Flesh, Cryptopsy, or the earlier works of Australians Psycroptic, I feel like it's often too set into a particular, hollow framework without much by way of inspiring ideas. The production's alright, with a nice sense of crunch to the guitars that gives the strident grooves a feel not unlike Morbid Angel's breakdowns on Domination, or Suffocation's Pierced from Within. The bass has a bit of a bombastic pop to it that helps it register against the guitars, and all of the instruments and vocals are reasonably balanced here. It was Beheaded's best mix to its day, but that can only get you so far, because I can say without question that among the hundreds of riffs throughout the album, there isn't one that truly drags me under. It's the audio equivalent of watching a mundane slasher horror flick which is composed of predictable stabbing after stabbing, and in my opinion the nadir of what work they've yet released. Worthwhile only if you're one to get excited by anything brutal, mildly technical and with the appropriately sick cover art and logo.