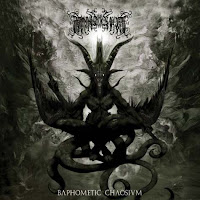 While Baphometic Chaosium doesn't necessarily retract the limitations of its predecessors, it compensates with a superior, frightening sense of atmosphere that makes it an engaging rabbit hole to tramp down all the same; or rather, a gaping abyssal maw which might consume a listener even if the actual metal core of the band is nothing all that impressive or unique. The Golden Plague and The Extra Dimensional Wound were not bad efforts, all told, but I couldn't help but feel underwhelmed at how the beautiful, engrossing artwork led to only a banal songwriting style that did little to upstage or deviate from prepackaged Scandinavian aesthetics, with only marginal differences in the vocals and production. In short, the Lightning Swords of Death had yet to really carve out their own point of view, something one might expect their geographical location (L.A.) might afford them, so far from those Satanic fjords and forests of the Norse and Swedish forebears.

Baphometic Chaosium does just that, but at the expense of much in the way of interesting riffs coursing through this tenuous 39 minute struggle with sanity. Elements of thrash and death metal have never been alien to their sound, yet here they strafe directly between the black/death genres, with a lot of morbid tremolo picking sequences that carry the ritualistic, bleak narrative of the vocals. Speaking of which, they've done a tremendous job to incorporate a cleaner, mournful doomed chant in among the expected rasps ("Acidgate"), wretched whispers of suffering ("Chained to Decay"), and so forth. The production of the guitars and drums here is extremely fluid. Primal and punishing, but remarkably polished so that the varied ambient effects do shine through when they are summoned forth from the pervasive, opaque occult atmosphere. The blast beats sound like an assembly line of brickworkers trying to wall off the terrors of the underworld, and the bass guitar often exudes a clever groove here or there to distinguish it from the straightforwardness of the rhythm guitar. Most of all, the ambiance of the album is extremely resonant whether it's been treated with a sort of atonal, warped spatial woodwind atmosphere (in the instrumental "Cloven Shields") or being used with more subtlety through the metal tracks.

I still really wish more ingenuity was being placed into the rhythm guitar progressions, and as an example of this, you'll hear how instantly something like the wavering, vile sequence in "Psychic Waters" stands out over the guitars in several of the other tracks. The ability is there to create this dissonant, fucked up mass of writhing, seething tendrils that can match the ominous, surreal ambient elements, but generally they stick to some fairly predictable patterns that don't exactly leave an impression on the melody. Thankfully, though, the album taken as a whole is more than sufficient, and provided a more harrowing excursion than either of their earlier full-length releases. Definitely an album to recommend to those who appreciate when a band steps outside of its brutal or incendiary status quo to offer a counterbalance of eeriness and atmosphere; such as Marduk's Wormwood, Emptiness' latest (Error), or 1349's last few records (though they were not themselves successful). I still don't think the Lightning Swords of Death have hit their peak potential, but it would only take a small push further in this direction to create a truly compelling concoction. Baphometic Chaoisum is more than a stopover until that time, and I enjoyed it.