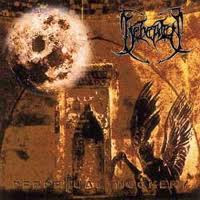 Apart from its historical significance as a point of conquest for a great many regimes, from the Greeks and Romans to the French and British, there is not a lot I know about the Republic of Malta. It's an island chain in the Mediterranean which I presume bears some similarities to places like Sicily, Tunisia, and other surrounding cultural environs. They speak English about as well as their own, national Maltese, and like any other unsung corner or hole of the world, no matter how obscure, they've produced a healthy if small metal scene. This began to take shape in the 90s, through influences of doom and death metal, and has ultimately resulted in a few of their most extreme bands gaining a cult following worldwide, the best known of which is Beheaded of Fgura, which is in the south of the country.

Though formed in 1991, once these gentlemen started becoming productive we were well into the age when brutality, as an aesthetic, had begun to grow independent of the thrash-based songwriting which had birthed death metal in the first place. Bands like Morbid Angel, Cannibal Corpse, Deicide and Suffocation were already immensely popular despite how far underground the genre had been wedged, and thus it's really no surprise that Beheaded tear off more than a page from the bible black of these artists. Murky, impenetrable rhythm guitar tone anchored by a lot of slower, trudging groove rhythms. A strong blasting element here, used often against a mid-to-fast tempo chugging guitar, with drums playing a rather voluminous role overall in the mix of this 1998 full-length debut, Perpetual Mockery. Guttural, hoarse thug vocals which often remind me of Frank Mullen or Lord Worm but never descent to the level of toilet bowl flusing; with a predilection for bursts of snarling mayhem redolent of how Deicide or Carcass introduced this sort of schizoid, sinister technique, though each of the inflections is often set up individually to bark specific lines.

But what really set Perpetual Mockery apart from many other, forgettable records of its age, is the strong presence of ambiance and atmosphere through both the ominous chord selection and implementation of synthesizers and acoustic guitars to break up the potential palm-muted monotony. Later in their career, the Maltese evolved into more of a straight, overly brutal USDM style, but here on the debut there is great deal of variation and 'measured intensity', by which I mean Beheaded were very much concerned with the balance of their songwriting techniques, creating metal that was admittedly accessible to a broader range of listener than your typical, estranged cannibal mosher. I wouldn't go so far as to dub this with the ever so ebullient 'progressive' tag, but clearly if the band had continued along in this direction that would have been applied to their legacy. Tracks like the lush "Ethereal Passages" with its cleans and spatial organs, or the moody intro to "Vae Victus (Prayer for the Vanquished)" provide a welcome contrast to the more percussive oriented bludgeoning elsewhere throughout the record.

I also noticed, in addition to the occasional squeals amidst the chugging, that the Maltese had a heavy influence from technical death/thrash of the late 80s, in particular bands like Atheist, or more precisely the first two Pestilence records (Mallevs Maleficarvm most of all). Whether this is entirely conscious or not I can't say, but there is definitely a harried, clinical subtext to many of the faster-based riffing sequences which often become the most compelling throughout the 45 minutes. Leads and melodies are also well utilized; even where the note progressions aren't exactly memorable, their solemn vacuity helps balance off against the more meat-headed, primal rhythm guitar/drum patterns. I couldn't notice a lot of bass through the album, other than an occasional distorted break or burst, but this is in part due to the band's focus on making those low end grooves feel dense and meaty, which leads me to what I actually don't enjoy about the disc...

The production. Granted, Beheaded were emerging from a smaller metal market and thus not one used to handling this sort of record, but I'm just not a huge fan of the dense and squawking rhythm guitar tone, which at best reminded me of some of the Morrisound disappointments. The drums have a level balance to them, and are very much in the listener's face the whole time, partially reducing the guitar to this kind of annoying, muffled drone when the instrument is not actually exploring the fretboard. To their credit, all of the cleaner guitars, the leads, and the synthesizers are plainly heard, as are the vocals, and intricacies of the more involved guitar sequences, but there points here where I just felt as if I was beating beaten on the ear with a rubber mallet, and not in a good way. I also wish the bass just stood out more in general from the mutes.

In the end, though, Perpetual Mockery is still an impressive outing, especially from such an unexpected territory, and it was more seasoned and dynamically pleasing than a great deal of dreck emerging from, say, the US underground at the same time. Its production values definitely 'place it' back in the mid through late 90s, and it doesn't have the same timeless resonance as several other, higher budget records, but it was a nice alternative for fans of Suffocation, Pyrexia and Cryptopsy to explore. With its intelligent lyrics and interesting compositional choices, this still largely holds up as one of their finest hours, alongside the more devastating 2005 effort Ominous Bloodline.