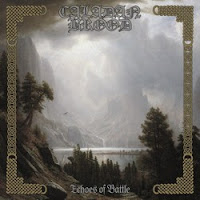 To properly cover Caladan Brood's epic debut album Echoes of Battle, it's important to first clear the elephant from the cage, because it's going to be said, and a thousand times: this is a band which sounds quite similar to Summoning. In aural architecture, theme, instrumentation, band makeup, and even the choice of cover artwork/framing, this Utah duo takes on an eerily familiar task to Austria's acclaimed partnership, and for many listeners this will immediately imbue a love/hate bias with what they've set out to accomplish. Granted, they're not the first nor the last to pursue this path. Acts like Kinstrife & Blood, Elffor, Rivendell and Munruthel have all explored a comparable sound, and to be truthful, Caladan Brood are one of the best of the batch, thanks to the cohesion and consistency of their vision and their capacity as songwriters to keep such bloated compositions from stagnating. Now, as I'm not one to hold a band's influences (even this overt) against it: 'imitation is the sincerest form of flattery', they say, and the worst I could claim is that Shield Anvil and Mortal Sword have great fucking taste. If the songs are solid, I'm not about to lay into Exhumed too hard for sounding like Carcass, or Kingdom Come for spending too much time nosing about in the Led Zeppelin cookbook. After all, how many of today's most favored black hearts have drunk too closely from the well of Bathory, Burzum, Mayhem, Darkthrone or Dissection? Why not Summoning, one of the greatest bands in the world?

Now comes the part where I convince you of the differences between Caladan Brood and their spiritual mentors. The most obvious is in the fiction from which the Salt Lakers have drawn their inspiration. Rather than become the next in succession for the Tolkien throne, which has at this point been comprehensively covered by acts like Summoning and Blind Guardian, this duo delves into the grim and oft impenetrable shared universe of Steven Erikson and Ian C. Esselmont's Malazan Book of the Fallen; a sprawling, dark, ambitious, richly imagined series of novels which this reviewer just happens to be a major proponent for. I cannot stress enough how important it is that a band pulls its head out of the arse of tradition and decides to bypass the usual Tolkien, Howard, Moorcock and Jordan cultism for something more refreshing, and in this day and age, deserving. Not that I've got a problem with most of those authors, mind you. I've been reading them for decades, with no end in sight; but bring on the Glen Cook Black Company brutal death, or the Jeff VanderMeer Ambergris funereal myco-drone/doom, the China Miéville Bas-Lag Gothic grindcore, or the Joe Abercrombie-based battle metal. I've spent more hours immersed in Erikson's dense, textured, beautiful and harrowing prose than almost any other author the past five years, so it goes without saying that I share Caladan Brood's passion (even named for a central figure in several of the books), and that really: it's about goddamn time.

How well does the duo convey the atmosphere from the setting through their music? Lyrically, I would say that they're spot fucking on. Much of the prose takes an atmospheric approach to important scenes and battles from the books, giving the listener/reader a more bird's eye, descriptive view of the setting, but there are also some pretty specific excursions, like "A Voice Born of Stone and Dust" which is told from the perspective of the undead T'lann Imass, some of my favorite characters in the stories. As for the music itself, I must say I was marginally less invested, perhaps because my internalized ideas for a Malazan 'soundtrack' would be more dissonant, disparate, complex, and hopeless. For all intensive purposes, most of Echoes of Battle lives true to its name: hymns of fell majesty and long abandoned battles, and in Caladan Brood's defense, there are a whole lot of these through the saga. The turning and shaping of a world and its deities, ever in flux and opposition. Reader response to fiction is always subjective, and I'd say the duo has done at least as good of aesthetic interpretation job as, say, Peter Jackson and his Lord of the Rings films. The melodies through these songs often feel too evident and safe, where I would have just gone darker, darker, darker than Anomander Rake himself...more obfuscated, more atonal, and more unnerving.

But that's really just a matter of personal preference. Caladan Brood still manages to evoke some haunted and chilling moments through the very nature of their chosen medium. Long, drawn out compositions range from 9-15 minutes, driven by programmed, thunderous percussion slathered in trailing streams of sadness suffused through the tremolo picked guitar patterns. The general tempo is a solemn, marching pace that is fit for its introspective paeans to both loss and beauty, but there are opportunities where the speed of the songs is ramped up to provide a degree of variation. I get a bit of Moonsorrow in numerous of the band's note progressions. Keys are used to represent bright flutes, horns, and other orchestrated fixtures and cast the listener into that alternate-reality Dark Ages atmosphere of the fiction, but in truth, this is where Echoes of Battle most mirrors its Summoning influence (and a hint of later Graveland). The difference, I think, is that Caladan Brood don't flaunt that raw, unhinged undercurrent of the earlier efforts in the Austrian's backlog; this is produced easily on the level of Mortal Heroes Sing Thy Fame or Oath Bound; so there's a good balance to the emulation of the drums, string and wind instruments that keep them constant with the distortion of the guitars and the unhallowed rasp of the vocal. Where needed, though, like the bowels of "To Walk the Ashes of Death Empires", this all swells into a wonderful portrait of gleaming sadness. Shield and Sword are patient composers, and like the gradual ballast of an emotional film score, they count the moments and strike where its most effective.

One welcome deviation here from their most prominent influence is the decision to implement brooding, harmonious choirs that resonate like a deeper, baritone approximation of the Faroe Islands' folk metallers Týr, or a bit of Borknagar. These are rich in tone, well placed in tracks like "Wild Autumn Wind", and provide an important contrast to the central, crude rasp, which is itself effective but not exactly news in the wake of such an expansive, populous genre. I also have to hand it to them: the sense of escalation and the lack of tasteless, endless repetition really help fill out the spacious compositions, and as such the 70+ minutes of the album pass without much ennui setting in. Riff for riff though, I didn't find the metallic components of the songs to be constantly fantastic or engaging. Individual progressions fit the framework of the drums and orchestration very well, but when separated from the rhythmic skeleton they're more or less familiar to anyone whose been listening to European black metal for the past 20 years. It wouldn't kill them to write some catchier, creepier note sequences with as much proclivity to stagger the listener as Erikon's written page. Also, the bass just isn't much of a factor throughout the album...you can hear it bucking along below the other instruments, but it's more of a structural support than a strong feature.

Ultimately, though, Echoes of Battle really isn't about show, flashy, or immensely intricate guitar rhythms at the fore, but more of a correspondence of all its instruments into a saddening, symphonic mass, and in this Caladan Brood most certainly is a success. Mood music for mysterious magical warrens and mythical warfare. A pleasant and poignant listen fore to aft, with a lot of threads of semi-hypnotic melody that arrive at critical moments to help alleviate the listener from any sense of exhaustion from the album's substantial torrents of grandeur. Yeah, it sounds like Summoning (they don't hide the fact), but one must consider that it is merely the duo's debut album. Imperfect, perhaps, and I couldn't point out particular tunes that stand out far from the rest, or any that resonated deep with me for a lengthy period of time, but as a building block for future progression and experimentation, it's an admirable debut, and the subject of their affectations really cannot be beat when it comes to contemporary VLFN (very long fantasy novels) of the darker, deeply anthropological variety. Whether you enjoy the Erikson/Esselmont collective or you have a craving for fictional battle metal on a massive scale, Echoes of Battle is worth your time to pursue. Time which I've already wasted enough of here, so Forkrul over that major credit card. I had to insert a bad pun somewhere.