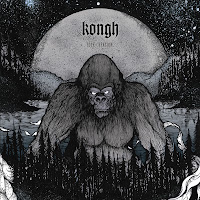 As much as my eyes might roll up at the mention of 'sludge' anywhere, one of the most overflown pipelines of punishment to emerge over the past 10-15 years of metal music, even my jaded arse has to admit that there are quite a number of acts who perform in these parameters with more than a mere adequacy. Sole Creation is only my first exposure to the Simian-obsessed Swedes Kongh, but I feel quite confident adding them to that list based on what I'm hearing here alone. Adventurous, bright, and bearing the production of a fleet of lumber-hauling semi trucks, this is an album which understands completely how to avoid falling into the claptrap of recycled Sabbathian/Buzz*ven stoner riffage; spreading the wealth across a range of busily calculated grooves, monstrous drudges, and even some atmospheric tremolo picking.

While I've not always been interested in the majority of bands pursuing this particular style, I have to say that the production has come leaps and bounds from where it was in the 90s. The volume and depth on Sole Creation is simply enormous, but even at its densest, where the drums are thundering along under the thick textures of rhythm guitars (for instance, late in "The Portals"), you still get a lot of clarity. The tone on the guitars is really raw, huge and abrasive, and yet it's not inaccessible and never obscures the finer details. The thump of bass is readily felt, even if the instrument's note progressions never really compete with the guitar riffing, or stand out from it. The drums definitely remind me a lot of Mastodon, that ever conscious style of shifting rock and jazz grooves crashing against the weight of the guitar, but in this case they're less focused on acrobatic athleticism and more on pure striking power. Really, though, there is nothing on this album which measures up to that massively saturated guitar tone, buzzing along like a troop of angry tree-cutters and transforming even the simplest note patterns into bruises on the listener's paralyzed body.

The vocals, oh the vocals. There are a number of styles being employed, from the standard blackened growls you hear on a lot of 21st century sludge, to a far more interesting set of clean tones channeling everything from Ozzy Osbourne's style of wavering, eerie pitch (old Black Sabbath and St. Vitus are good reference points) to a more layered melodic richness which occasionally reminded me of a hovering, mid register Layne Staley. The result is that Kongh feels like a traditional doom act enveloped in a more contemporary epidermis of slogging sludge, and this compounds the albums versatility. Throw in some more spacious, tremolo picked walls of guitar that tease a bit of a black metal element, and some muddy, solemn guitars that flirt with a cleaner tone ("Skyming") and the four considerable tracks here (across 45 minutes) never run out of ideas to fling at the listener like the ape on the cover must fling trees at unfortunates who happen on by. Granted, not every riff really sticks, and the songs aren't the most memorable I've heard within the medium, but I can't imagine fans of anything from early Baroness and Mastodon, to Ilsa or Ortega, Cult of Luna, Electric Wizard, hell even Count Raven or Terra Firma not enjoying the hell out of this thing.