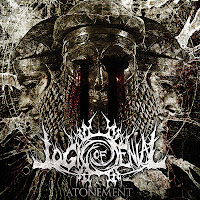 First impressions of this album were that an unannounced, anomalous tornado had just manifest about 10 yards from my apartment complex and then proceeded to ravage my family and belongings. Second impressions were a bit difficult to ascertain, as I was still hospitalized from the first impressions. To dub Italians Logic of Denial as an 'intense' death metal act would be an understatement. Despite their relative youth in the field (forming around 2006 in this incarnation), they've got all the chops and technical ability to run alongside such celebrated acts as Nile, Behemoth, Krisiun, Immolation and Morbid Angel, each of which you are likely to notice within the architecture of Atonement, a sophomore that will be spinning heads, if not necessarily emptying out the wallets of those hands attached to those bodies who own the heads. Trust me, though: if you admire unflinching excess, hyper-realized pacing, pinpoint accuracy and dizzying acrobatics in your death metal, WITHOUT the expectant fits of arbitrary noodling, Logic of Denial is dialing your digits.

It would be impossible for one of my long history with death metal to not appreciate at least some of what's transpiring on this sophomore. To define the drums as inhuman would be a moot point, as percussionists of Daniel Costa's nature are practically born with additional feet and hands that they keep hidden from the world, but I still find it hard to believe an individual can possess such stamina. The guitars unleash a bevy of staccato rhythms, denser chords, frolicking tremolo riffs and breakdowns that move a mile a minute. I can just imagine a crowd trying to effectively mosh to these rhythms at a gig, and the band stopping mid-set to exclaim 'Sorry, you're just not keeping up!' at the audience. There were times throughout the track list where the bass did get lost, but if you pay close enough attention you'll note that this guy is just as busy plugging away at his instrument as anyone else in the band, and when he hits the higher strings the notes stand out a bit more from the vortex of guitar progressions. I should also mention that Atonement isn't just whipping along at higher velocities without exception; there are various tunes throughout the 11 here (like "Catharsis Through Ungodly Annihilation" and "Despondency") that tackle some steadier, mid-paced battering ram riffs which develop a decent contrast to the lightning fare.

Vocally, the guy's got a growl which isn't too guttural, more along the lines of what you'd find in the Polish or Brazilian scenes. A lot of the stylistic choices, tempos and actual riff constructions bring me back to records like Annihilation of the Wicked, Conquerors of Armageddon and Domination, but the sheer speed and atmosphere created through its propulsion definitely scratches that brutal, blackened death aesthetic present in bands like Behemoth or Hate. Logic of Denial are not without a refined sense of melody (like the leads in "Despondency"), but I will say that Atonement could have used more of this, and even a few additional breakdowns or atmospheric segues to counteract their forceful eruptions of strength. They throttle about 1000 note progressions in your direction, but only about a quarter of them really stick. Nor are they really bringing anything new to your table. But those quips aside, this is a fairly high end effort, impeccably crafted to utterly destroy anything in its path, and if you're in the mood for unbridled speed and retribution, this will indeed fill that void, placing Logic of Denial on that same radar that brought international notice to their countrymen Hour of Penance and Fleshgod Apocalypse. Just be warned: call the paramedics in advance and make sure they have a stretcher available. And be sure to insure your property against environmental damages! Flood, fire, severe winds, this one's got them all.