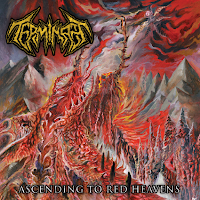 As heretical as it might seem to some fans, recent months have had me forging a debate with myself over whether or not I anticipated hearing newer, American or European bands, at least in terms of this wave of old school death metal worship that is all the rage these past 4-5 years. After careful consideration, I'm choosing the former. Not because there aren't great examples, or exceptions, in either category. No, largely because so many of the bands overseas seem to be about meticulously recreating the sounds of classic albums and only rarely deviating from the norm (outside of the obvious advancements in production); but the American advocates seem to derive more from a hodgepodge of scenes and influences, which can naturally result in a more interesting and unique end product. Translation: I guess I'm just burned out on so many bands sounding too close for comfort to Left Hand Path, Mental Funeral, Indecent & Obscene, and other cult classics. It's becoming redundant.

Ascending to Red Heavens, the full-length debut of Illinois' Terminate, being released through Polish imprint Selfmadegod Records, is hardly a revelation, and translates its sound from all manner of late 80s and early 90s death metal pioneers, to produce something slightly more refreshing. Yes, I can clearly trace some of the Autopsy heritage due to the band's filthy, unforgiving sound and vocals; and yes, the grime encrusted over the guitars is not unlike a number of Swedish forebears and their followers, several of which the band itself cites and an influence. But at the same time, I felt a lot more of an old deathgrind sensibility in how many of the riffs were constructed. Some Bolt Thrower here, or Repulsion there. Some of Martin van Drunen's earlier works, like The Rack or Consuming Impulse. They also favor a generally fast-paced, tremolo-dense brand of riffing which lands them somewhere between the Swedish and Floridian classics, and crazy atonal leads that ascended from the wilder West Coast thrash/speed metal acts of the 80s. Most of all, though, I really enjoyed the vocals here, which had more depth and resonance than many of the usual Petrov/van Drunen style frontmen, fired off across the bow of the grinding, saturated guitar tone. Totally warlike, and measured directly against the volume of the guitars in the mix.

Now, this is not an album inundated with the most gifted, distinct or memorable set of riff progressions you're like to hear, unlike, say the latest albums from Morbus Chron, Horrendous or Necrovation, which all did some pretty interesting things while staying loyal to the medium. Most of Terminate's tunes involve tried and true, familiar sounding patterns that deliver largely because of the band's sense of brutal sincerity more than an engrossing grasp of composition. This group is under no illusions about itself: it makes death metal ugly again. Uncaring, and faintly evil, its own atmosphere manifest through its miasma of hellish sounds and that freakish, all-consuming landscape on the cover. Creepy! I did feel that the songs, while consistent, did occasionally run on together in terms of distinctiveness, and there are several production issues, like the leads seeming difficult to hear below the weight of the boisterous rhythm guitar, or the drums feeling a little too tinny to support that swarthy tone. Bass? It's there, but whether due to the distortion or volume, also can't seem to breach the two rhythm players. In the end, while I didn't love Ascending to Red Heavens, at least it kicked my ass down memory lane without feeling too much like I'd taken the exact same trip before (even if I have). Not bad. One for the purists.