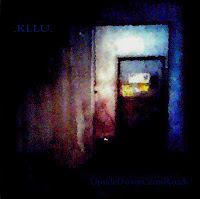 Though I listen to and enjoy electronic music in a multitude of forms, almost as much as metal, the amount I receive here at the site to cover is obviously disproportionate to all the death, black, thrash, doom and whatever else. And it makes sense: I've been trying to stick with one broad aural/cultural medium to build my critique chops, and just haven't felt so comfortable delving into other spheres of sound. I bring this up, because like myself, the members of KLLU are also involved in some heavy shit: specifically the Illinois experimental doom lords Drug Honkey, whose fourth full-length Ghost in the Fire still spends a considerable amount of time in my CD player, whenever the whiskey and pills run dry. Specifically, this is a project of drummer Adam Smith and vocalist/multi-instrumentalist Paul Gillis, who throw down here with a few other experimenters in Eraldo Bernocchi and Mark Piotrowski to create a panorama of beats and noises both lush and taxing. So as hard as it might be step outside of my comfort zone, I will damn well attempt to describe what this is.

Downtempo, cerebral, haunting, and yet very often possessive of an unexpected warmth. Not the warmth of an angel's radiance, or a hearth, perhaps, but that of a subway light fixture on a cold winter night. A sense of being snug deep in the rectum of humanity, cigarette butts heaped by your feet, strangers passing you by with nary a glance to affirm the species connection. All of this is conveyed through a palette of programmed beats, waves of depth and distortion, and lots of glitchy alien electronics providing a surreal backdrop. Like a lot of experimental industrial/electronic music, there are times where you'll feel as if the presentation doesn't have much purpose aside from tweaking around with a certain set of sounds, but that's really the joy of UpsideDownCrossRoads: 30 minutes of escape into the unknown. There were pads and effects here that reminded me of anything from The Orb or Orbital to the dark ambient/noise-scapes of a dozen more obscure artists, and they incorporate filtered sounds that might have been vocals or strings in origin, but have been twisted into a matrix of mutation. Truthfully, there's quite a lot of variation present through the give tracks, even though they maintain central themes of feedback, contrasts of dark and light in the effects. It's as deliberate as it is formless, as live-wired as it is decaying.

We're not talking fraternity bro-step here, with freak-out breakdowns and scattershot hip hop dance club associations. It's not Skrillex, fuel for a next generation of rave culture. No, this is the voice of living rust, machinery, and urban arcana. Things you forgot on a back street, in a basement, finding their own means to communicate. It's not overly harrowing despite the members' tendencies towards balls-out oblivion-level heaviness in other projects. It's cryptic, but you won't require Neal Stephenson to translate it for you. The production is gorgeous, eloquent even, with addictive noise panning through the headset and each sound a pleasure to interpret. The beats are paramount yet duly minimalistic, but on the closer "Impossible Dark" they actually drop the percussion altogether for a more freeform experience. My personal faves were "Dead, Like Me" which is complex and mesmerizing; or the warbling, wailing "Keep Us Forever", a lexicon for robotic subterranean whales, but in truth the whole of the album is pretty level in terms of its uncanny magnetism. KLLU gets you concurrently high and low. Psychedelia of asphalt and alleyways, well worth your abuse.