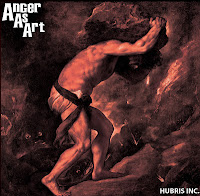 While many of today's younger, throwback thrashers rumble with one another to determine who has the most '80s cred', California's Anger As Art is the living DEFINITION of such status. Members of this group have done their time in acts like Abattoir, Bitch, Bloodlust, and Dreams of Damnation, and some of the more prolific constituents (like current drummer Rob Alaniz) have also explored the realm of extreme metal in numerous black and death projects. So it's no surprise, that when all these gentlemen get together, it sounds a lot like 25-30 years ago, a fact their latest album plays to both its strength and bit of its more obvious derivation. I've heard several of their past records, and enjoyed them, a reaction that hasn't changed with this latest material.

Yes, borrowing from the Golden Age of the medium is hardly a novel idea this past decade, but it's just how this band approaches it that makes them such a rarity. This isn't strictly a riffing machine, attempting to pack as many sound-a-like Exodus and Metallica guitar progression into a youthful, ironic sense of complexity, but a gang of veterans who know to pace themselves, to take their time and focus around a few charging hooks. Aesthetically, they rekindle nostalgia for everything from classic Megadeth, Metal Church or Destruction's riffing impetus, but also to more obscure US acts like Wargasm, Bitter End or Meliah Rage. The vocals really standout, a castrated and pissed off tone that sounds like a more vicious alternative to Russ Anderson of Forbidden's lower range, broiling venom at the edge of the ton with a number of harsh and sporadic screams. The guitar tone in a "Pieces of Red" or "Pearls Before the Swine" punches straight through your chest cavity. Riff construction is choppy but never obsessively complicated; packed with melody, variation, and intensity so that few of the individual cuts sound quite alike. The drums don't overdo Alaniz' more extreme techniques, but obviously the man can play the shit out of a thrash hymn not unlike Gene Hoglan once did. I'd also point out the general quality of the leads, which race along live devil rides burning down a stretch of deserted highway.

Hubris Inc. is loaded with material, 14 tunes total, but most of them are pretty concise and flash on by without wearing out their welcome. The only sore thumb for me was the track "Rage and Retribution", in which Betsy Weiss of Bitch, Witch and Betsy contributes a guest spot that feels too phoned in, cheesy due to the laughable pissed off revenge lyrics; and that opening, palm muted sequence is just too reminiscent of a number of earlier thrash classics (Sepultura and a few others). Don't get me wrong, I don't mind Betsy's personality and she had a few decent albums back in the day, but for some reason this duet came off really corny. In fact, I wasn't too smitten with a number of the lyrics I could make out, or the song titles, many of which feel cliched like you'd find on a number of Overkill albums in the 90s. But otherwise, Hubris Inc. is about as authentic as they come. The Californians' suffer no delusions about what they're transplanting from their youths into the current age, and at least 30-35 minutes of the 55 are packed with excitement, anger, and sincere enthusiasm for this aged but not ailing genre. Not a masterpiece by any means (and I'd rank a few of their older songs above most of these), but I had a good enough time listening through this.