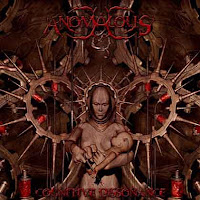 With a level of technical ingenuity and surgical intensity that easily rivals local luminaries like Decrepit Birth or The Faceless, California's Anomalous has proven one of the most dizzying acts to emerge from that substantial Golden State scene in the 21st century. Now, whether you go out for this dextrous excess and proficiency in your death metal or not is going to go a long way in determining how well you can ingest and translate this music into your own personal space; but in any event, it would be criminal to ignore the bewildering level of talent on a theoretic scale that the members possess, and their balance of whipping, battering, staccato-driven mute-storms and sleek, solar jazz/fusion skills makes for a contrasted, appealing experience, with only a few limitations.

More than once have I seen this band referred as carrying a 'djent' influence, and that's not a description I'd disagree with entirely, though the impetus throughout Cognitive Dissonance is clearly about 50% acrobatic brutality, 25% jazzy ambiance and another 25% of a hyperactive throwback to Meshuggah circa 1995-98. This is not just felt by the explosive, mechanical grooves and off-time chugging, but also in the hoarseness of vocalist/instrumentalist Tim Hale, which alternates with a more punctual, brutal guttural standard to provide some angry variation. It also wouldn't be a stretch to assume Anomalous count progressive, fusion inspired forebears like Atheist (Unquestionable Presence), Death (Human and beyond), Pestilence (Spheres), or Cynic (Focus) among their personal listening material, at least for the synthetic sound design occupying the middle chunk of the EP, and the various ambient subtext elsewhere. But while such a complex formula could easily get out of hand in the hands of a band of overly self-indulgent dilettantes, I felt that Cognitive Dissonance was, for the most part, a very cohesive, focused experience; simply one that flings a million riffs and ideas at you that take some quick reflexes to interpret, rather than merely to write off as spastic noise.

For one, the ambient, jazzier guitar-scapes present on this thing are utterly astounding. Pure escapism, brilliantly developed from about the jarring close of "Metastasize" through the intro to "Subliminal Servitude", smack dab in the center of the Californians' more frenetic compositions. If all the music on this recording were as beautifully formed as the instrumental "Merged", I would give this EP a perfect score without hesitation. Fragile and melodious lead lines communicate over a shimmering backdrop of ambiance, and you almost feel like you're gliding some solar-powered kite through our universe, star-stuff radiating through you as the various suns' flares fuel your journey. Next to this cautiously crafted, dream-like component, all of the band's considerable technical splurging seems almost useless by comparison. No bric-a-brac of spurious arpeggios, scales, pinch harmonics and impossible robotic grooves can measure up to this intangible, joyous vision, and so the harder stuff has its work cut out for it. Fortunately, for the most part, Anomalous seem up to this task, even if the EP ultimately feels like it crests its summit of creativity with the instrumental.

It's very, very easy to get lost in this labyrinth if you're not acclimated to intensity for intensity's sake.The mechanized drumming feels like a half dozen automated factories manufacturing disparate appliances, all sampled in unison; the buttery, Cynic-al burp of the bass-line never once kowtows to the harsher rhythm guitar punishment; and the voice, though the most familiar and friendly access point for the ear, still feels like a schizophrenic who thinks he's the living embodiment of Chaossphere and half of the Deeds of Flesh backlog concurrently. To be honest, of the myriad of rhythm guitars hurtling past you at light speed, there are few that would stand up to scrutiny if plucked out and slowed down. Anomalous certainly relies on a sense of overwhelming its audience in order to impress them, and yet tunes like the titular opener or "Metastasize" have enough of a balance between atmospherics and instrumental aerobics to avoid the juvenile cliches and oneupmanship that often corrodes the arteries of this medium. Simply put: these musicians are so effortlessly unbelievable that they don't feel as if they're showing off, just putting those skills to good work. If given a choice, I'd have opted for more of the "Merged" sound here, but it's overall a palpably exciting introduction.