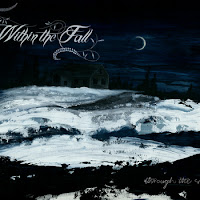 I had previously reviewed this Swedish group's 2011 demo A Story to Be Told, their initial foray into melodic death/doom that drew influence from the earlier works of UK legends like both Paradise Lost, My Dying Bride and Anathema, and their own crushing countrymen like October Tide. Interestingly enough, they've also got some connections to another band called Soliloquium, whose demo I recently covered, and had a comparative style. A scene in the making? I've no idea, but Through the Shadows is a pretty huge step forward in sound quality and songwriting from its own predecessor, surpassing it on all fronts, and professional enough sounding that I'd be shocked if the band was not on the threshold of some label attention.

Where the prior release suffered somewhat from a swollen, overlong composition, the four tracks on this EP are more compact and manageable. They truly emphasize the 'death' elements here in addition to the doom, with massive guttural vocals in the vein of  Dan Swanö, or earlier Jonas Renkse before his Katatonia cleans. The melodies are lush and mesmerizing, and the low-end chords simply crush the listener despite their own inherent simplicity. I felt that the progression of the EP was a fraction misleading, since they have the heaviest track up front, a brutal chug fest called "Into the Arms of Grief" which branches off into these beautiful, eerie harmonies, and a lurching atmospheric bridge with some spectral tremolo picking. The remainder of the tunes are cast in a sadder pallor, lurching along beneath the weight of their storming, sorrowful melodies, double bass rolls, clean guitars with whispered dementia vocals; but all are consistent in quality, and the 8 minute finale "The Burial" has these beautiful, ringing clean guitars and tribal drums that build steadily unto the climax.

You won't find a lot of complexity here, since it doesn't really suit the style, and I can't say that the heavier riff patterns feel all that unique or intensely memorable, but Through the Shadows all comes together like a  suicide pact on an empty landscape, and the emotional restraint of the varied sequences is well arranged so that the songs never become dull. Even the cover art is a stride above simplistic like a child's painting, but beautiful, its color scheme matching the mood of the music completely. All of this, and the fact that the EP is available as a 'name your price' download on the band's site should compel ardent followers of modern, atmospheric death & doom to pursue this; in particular, fans of Isole, October Tide, (early) Katatonia, or Finland's Swallow the Sun and Insomnium will enjoy the band's enormous tone, and their infallible balance between eloquence and power.