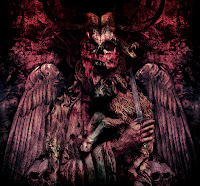 The first thing that struck me about The Acausal Fire, much like Bane's prior album Chaos, Darkness & Emptiness, is just how Scandinavian an approach they take to their atmospheric, semi-symphonic brand of deathly black metal. The majestic progressions present in their tremolo bursts are redolent of groups like Dissection, Dark Funeral, Marduk and Lord Belial, the vile dissonance of the eerier minor chords was pretty much the standard in the formative works of Norse and Swedish acts through the 90s and beyond, and they're not the sort to shy away from using higher, cleaner production standards than the primordial swamp of grime and wretchedness that inspired them.

However, despite its obvious level of competence and polish, I didn't take much away from their debut. A decent album, sure, but nothing to write home in blood about when there were hundreds of other, similar options through the prior two decades which had already marked out the territory. The Acausal Fire is a superior use of the band's arsenal in just about every department (save maybe the vocals). The Serbians have made better use of their twisting tremolo progressions, and loads of eloquent dual harmonies that create a necessary contrast against the gruesome dual guttural-rasp vocals. Needless to say, there are effortless blasts coursing beneath the rush of the guitars, and the band lean on the faster side of composition, but The Acausal Fire takes plenty of moments to breathe here, and the riff selections are in general far better than those of the prior album. Symphonic elements used in spots like the 'intro' and 'outro' are lavish, moody, orchestral and engrossing, while the gleaming melodies of tunes like "As Chaos Rises" will instantly settle themselves into your memory without much concentration.

Vocals are quite varied here, with the aforementioned grunts and rasps used throughout most of the metallic sequences, backed by excellent, cleaner choirs or the occasional surge into some salacious snarl not unlike you'd have heard from Ihsahn or Dani Filth in their primes. The mix is incredibly, almost surgically pristine, so those who want a lot of mud, reverb and noise in their black metal will not desire to slop from this trough, but personally I'm a fan of both sides of the coin, and have no problem with either when the music's good. And this music IS pretty damn good. Not perfect, surely not unique in the slightest, but very well executed black metal that furthers the Serbians and songwriters. The inclusion of the cover of Dissection's "Night's Blood" is a fitting bonus, not only because that's a great song, but because Bane knows exactly what to do with it; the Swedes were unmistakably one of this band's most fundamental influences. Apart from being brighter, though, it's hardly an unusual re-interpretation. But it doesn't need to be, because the rest of this album leading up to it is quite spectacular of its own right.