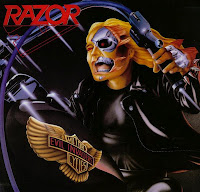 On its surface, 1985 might have seemed like a pretty bustling year for Canadian speedsters Razor, debuting not just one, but two full-length albums over the span of several months. However, there are some notable stylistic differences between the two which distinguish them from one another, and while my own personal preference runs towards their underrated speed metal opus Executioner's Song, it was Evil Invaders which would ultimately define the band's future path into a more ballistic squad of urban thrash commandos, abandoning some of the sheer speed and heavy metal dirt of the Armed and Dangerous EP to carve out a niche in the emergent thrash aggression; a course of development that was not merely an aping of the Bay Area and German sounds, but more of a brutal parallel.

Don't misunderstand me, the sheer velocity and the vocal inflection between the first two records were close enough that the band could easily interchange songs in any set list and satisfy the same crowd of followers, but unlike their countrymen Exciter, whose evolution never really veered away from the primal speed/power metal sphere, Razor made a quick career course correction which they continued to hone until their 'artistic' peak, 1988's unforgettable, chainsaw wielding Violent Restitution, a record so swollen with violent, ripping acceleration and pent up, everyman gallantry that it's one of the best in its entire field. Of course, while Evil Invaders is a much beloved record in the underground, due largely to its formative and 'cult' placement in the thrash pantheon, I constantly find myself comparing it to that later effort, and that has somewhat crippled my appreciation. For all its strengths, this sophomore feels like a foreshadowing of that stronger effort to come, and on a song to song basis, it also fell short of Executioner's Song. Tracks like "City of Damnation", "Fast and Loud", and "Take This Torch", among many others on the debut, have resonated with me for decades, whereas this song gets substantially less airplay beyond a handful of cuts.

Nonetheless, Evil Invaders is feral and fun, as any of the Razor albums with Stace 'Sheepgod' McLaren fronting Dave Carlo's monstrous riffing section. For me, it was this duo that really 'made' the band's style something special. While competent, and even consistent, the later records with the Bob Reid vocals have never had a fraction of the same charm. McLaren's delivery is basically a blunt barking (thus the nickname) in a low to mid-register, which occasionally veers off into screaming, like those nasty bits in the bridge of "Legacy of Doom". He's not incapable of carrying a melody, but the emphasis here is always on percussive intonation that brings the music straight to the butcher block. To the dingy city streets. Cigarette-smogged nightclubs.Vomit-strewn drunk tank jail cells. Paired with Carlo's blustering, chunky tone, which moves so quickly that the distortion almost feels like it can't catch up here, you've got a pretty destructive foundation for some flying axe handles, stage dives and body slams in the audience. Though the band's sheer dexterity was roughly on par with Exodus, Destruction, Slayer and other titans of the time, the inebriated grime of this record reminds me more of the first two Venom records, the Indestroy debut, Hallows Eve or fellow Canadian scum Piledriver.

"Evil Invaders" itself is one of tracks I most enjoy here, opening with a pretty filthy mid-paced stock speed metal riff before picking up frenzy with its splattered, thrashing verses that almost exhibit a modicum of crossover influence. "Iron Hammer" is the band's own "Iron Fist", or "Iron Dogs" (Exciter), or "Iron Gang" (Voivod), with some punk-injected bass lines setting up a frothing, vicious frenzy. Other favorites include the mighty "Cut Throat" and the excellent "Tortured Skull", both of which are loaded with the sorts of ferocious, adept riffing passages that would later dominate Violent Restitution. Carlo's speed picking is simply intense throughout, with pretty powerful muting skills, so I can imagine the guy must have had quite the crushing grip. The leads harbor that same wild-as-fuck aesthetic that bands like Slayer had helped pioneer, never all that memorable, but suited to the raucous songwriting; and drummer 'M-Bro' is likewise a beast, laying out the splashes and crashes with a raw, hardcore pileup fervor. The one instrument which doesn't always shine is the bass, since it often just sort of subsists on the guitar progressions, but there are points where he's given his time to stand alone.

There are a handful of weaker tracks throughout the album which definitely limited its value, not the least of which is the opening mosh instrumental "Nowhere Fast" (another strategy the band would refine for the far better Violent Restitution and its intro "The Marshall Arts"), or the closer "Thrashdance" which has a less interesting riff count than its neighbors. Ultimately, though, if you're looking for speed and abuse, I won't deny that this hits paydirt. Not my favorite of their works, clearly, but strong enough that I'd place only its predecessor and Violent Restitution above it. Razor makes the slight, but successful transition here to a more lethal level of muscle and hostility, providing a burlier atmosphere than Execution's Song, but to some degree losing some of those killer choruses that lashed themselves to your ears. A damn good record for the 80s thrasher to cherish, with its Terminator-inspired cover, but not nearly as amazing as its high cult status might lead one to believe.