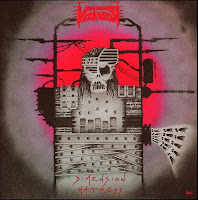 Have you ever experienced a symphony live, stood back and soaked in all its various, congruent instrumentation? Puzzled at how a single human being could have coordinated all the various threads and sections into one cohesive movement? Marveled at what a mind, or collective of minds, this would require? Well, Voivod's fourth full-length Dimension Hatröss offers much the same sense of wonderment, only its orchestra pit has been rendered down to a quartet of Canadians, gradually evolving out of the raucous post-apocalyptic punk/speed metal of their youths into something I don't think anyone could have predicted. This is not a mere album, but a coherent science fiction journey expressed through some of the most creative thrash metal of the 80s.

Personally, I find the band's three successive albums in that 1987-1989 period to each be spotless in its own right, but if prompted to choose just one as an introduction to the band's genius, Dimension Hatröss would be that defining experience. Not only for the unforgettable music itself, but for the amazingly prescient Outer Limits-like concept fueling its central narrative. It's basically an extraterrestrial Fantastic Voyage-noir, in which the band's mascot creature, the 'voivod' uses ridiculous Goldberg science to spawn a microcosm of galaxies, and then use its own twisted technology to step in and explore them, reveling at the various alien cultures within these shattered atoms. Like all great science fiction, though, the numerous social and political situations the voivod encounters within this debatable space reek of tyranny, chaos, oppression, and class warfare, all reek true of our own civilization through history, and thus as foreign and otherworldly Dimension Hatröss may seem on its surface, it's really one giant, timeless metaphor the listener can bet will retain its relevance for the rest of his/her natural lifespan on Earth.

Each component of the album's production and visualization is the perfect catalyst to shape its story. The cover art, drafted beautifully by drummer/writer Away, is one of the most striking and iconic images of the band's career, more colorful than his artwork for the first three records. A frightening, freakish biomechanical aberration stands against some radiating nucleus, crowned by the band's blood red logo. The sort of album cover that I stare at decades later and still find attractively disturbing. The lyrics are scrawled in patterns that create a first-person stream of consciousness of the imagery the 'narrator' has experienced, very brief lines and refrains that relay all manner of key phrases as the voivod journeys on into the madness of this genesis. Much like a captain's log, or a scientist's rambled test recordings; even the narrator itself seems difficult to trust due to its 'voice', but at the same time, the lyrics remain strangely accessible, more 'street talk' than arbitrary technobabble. A wise choice, as the band didn't wish to confuse an audience that was adjusted more to the messages of Anthrax, Possessed, Slayer and Metallica.

One would suspect that the Canadians might drown such a 'space oddity' of a record in loads of effects and excess futurescapes like synthesizers, but once again Dimension Hatröss trumps expectations with a very grounded, sincere production. There are occasionally some processing effects on Piggy's riffing experiments, some fuzz to the bass, and reverb to the vocals and drums, but otherwise this is completely down to Earth progressive thrash metal which you might be experiencing in a rehearsal room. Don't get me wrong, this was professional and polished enough to run with the bigger guns like ...And Justice for All or South of Heaven, but it's remarkably workmanlike, and Voivod sought only to deliver their alien experience through the lyrics and composure of the music itself. Everything is clearly defined and audible, from the grooves to the vocals to the dissonant slices of atmosphere D'Amour splashes upon its obscure universe.

It's not an easy sound to pinpoint, but to best describe the music would be like taking Killing Technology's brash, grimy hyperspace acceleration thrash as a base. Then stir in the percussive, tempo twining hysterics of progressive rock titans like Rush and Yes, swirl in some psychedelic Pink Floyd ambiance and abandon, and season liberally with fusion rock or the voluptuous, eclectic space-funk of artists like Herbie Hancock. Plenty of pure, post-industrial thrash riffs abound through the eight tracks, but they're sauteed in all manner of strange architecture thanks to Piggy's inventive chords. Through the 90s and beyond, a lot of sludge, math core, industrial black and technical death outfits would implement a similar field of streaming minors and abstract note configurations, and a lot of 'core kids and metal nerds were reared on them. But who was the first extreme metal angler casting for dust on the moon, fuckers? Denis motherfucking D'Amour. The leads are whacky, trippy and sparsely wrought through the experience, but each perfectly placed. I also love that the rhythmic choices in each of the songs seem to reflect the culture being explored, but they maintain an aesthetic cohesion throughout the 40 minutes.

Away proves himself an extraterrestrial Neal Peart here, eagerly matching the dynamic eccentricities of the bass and rhythm guitar with swaths of double bass, thundering fills and ample athleticism. Bassist Blacky stands out more here than on Killing Technology, a grooving dimensional rift-beast that anchors the spectral, slumming atmospheres of a "Chaosmongers" or "Brain Scan" with the psychotic communique of its bridge; but also fluid and distinctive in the faster lanes. To this we add Snake's unique punk inflection, somewhere between Bob Dylan and Johnny Rotten if they were spending a night at the local rehab, flushing the chemical adversary from their systems. His voice might run on the nasal side, but it's quite effective at piercing the nebular haze of the galaxies being explore, you can just hear it ringing out on the edge of some black hole, shouting out to you: 'Hey, I'm over here!' Everything instrument and vocal passage is bound together into a lattice of brilliant, ever mutating rhythmics and alien introspection.

There was not a goddamn record out there in the 80s that sounded nearly as stoned on xeno-substances, and every moment from the turbulent intro of "Experiment" to the hammering, jamming sendoff to "Cosmic Drama" has had me hooked for almost 25 years now with no signs of letting up. I'll except the bonus track, a dystopian street surfing spin on the old Neal Hefti television Batman theme, which is obviously not so ambitious or serious as anything else here, but this wasn't available on my original cassette, so it never mattered much to be as anything more than a quirky addition when I upgraded to the CD. Still, the fact that they would even perform such a piece infuses positive karma to the Canadians' inner geek; I once tracked a psychedelic, surfable metal cover of the theme from the moody 60s animated Spider-Man theme for fun, replacing the vocal lines with spacey leads, totally inspired by Voivod.

Of course, there's always been a Flat Earth Contingent among thrash/speed metal fans who never enjoyed this album, never 'got it', or never really cared to try, since it wasn't a rehash of Kill 'Em All, Show No Mercy or Seven Churches (hypocritical, perhaps, since those albums themselves were innovations). People don't want their air space threatened. Many will change the channel when they see Star Trek original series reruns, and hell, some folks just don't want the Twilight Zone impeding into their mosh pit. Much like Killing Technology before it, Dimension Hatröss was just too 'out there', the story of the Canadians' career, and the uphill battle that they've always fought, even when writing more accessibly works like the followups Nothingface and Angel Rat. To these I offer a beer, a cheer, conversation, condolences, and then I'm on my merry way, because I was just bred for an album like this. It's surely a top 20 metal album (all time) for me, and possibly my single favorite Canadian metal effort. Where imagination, vision and musical talent collide and tear asunder the fabric of possibility of something new. Frightening. Inspired. Immortal. Get connected.