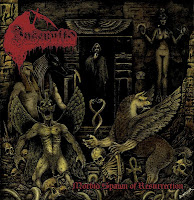 Insepulto is only the second Costa Rican act I've covered in years of writing reviews, but don't mistake the novelty of their surroundings as any sign that they don't possess the chops and ability to impress anyone; the trio has about 20 years experience in various other groups, and they bring it all to bear on what must be one of the most well-rounded, crushing hybrids of old school death and thrash metal that I've heard in many a month. Morbid Spawn of Resurrection might only be their debut, but it honestly sounds like the output of some seasoned voices in the field, if they were to reach back into the dawn of the 90s and then write an album fully centered on the sounds so potent and prominent back then.

Everything from slower death metal like Bolt Thrower, Cianide, Benediction, Cancer and Autopsy to the roots of primal death/thrash like Sepultura, Assorted Heap and Protector is crossed over into a matrix of brute, pummeling riffs, while the atmosphere and occult/sacrilegious themes often reek of Incantation. The rhythm guitar tones are dense and rich, and even though the individual, slower patterns do often hinge on the too-familiar, the songs are written in such a taut, 3-minute average format that they all pace themselves out rather well. I'd also note that the leads are incredibly well-defined; not exactly complex, but they scream out over each bridge rhythm efficiently and really pack in that extra texture of eeriness that will sometimes be lacking from one of the lower end riff passages. The songwriting splits its time pretty evenly between vile tremolo picked note progressions and mid-paced, swerving brutality. Drums are supremely polished, with great kick work and grooves that sit like blood-soaked bedrock beneath the incessant riffing, and some nice fills into the transitions. Bass is also very fulfilling, ominous and low even if it doesn't divert from the guitar.

Vocally, you've got a blend of the deeper gutturals circa Karl Willetts, Dave Ingram or Craig Pillard, with some blacker rasps that have the same natural level of atmosphere and sustain. It's nothing you've not heard before, but consistent and lovingly delivered with a primal brutality that gives the album much in the way of a claustrophobic, bruising atmosphere. There are a few flights of more frenetic, clinical notes that remind me of a Pestilence or Sinister, but otherwise it's all pretty basic. The Costa Ricans clearly have roots in the 90s, when so much of this music felt fresh and threatening, before bands began to explore a more technical sphere of expansiveness, but nonetheless Morbid Spawn of Resurrection feels completely timeless, as if you woke up one morning, glanced over at your clock to find that it was 1993 again. And yet, this is no clone band, you can't quite trace their sound back to a single band, but more of an amalgamation of all of those English, US and South American pioneers of the period. This isn't your typical cavern-core dowsed in tons of reverb and ominous drudgery, or a Swedish derivative. Complete with a great logo and hellish cover, it's a worthy paean of past punishments time warped into the present.