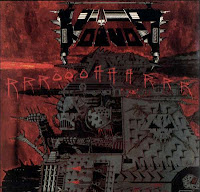 Confessions of a 12-year old: Rrröööaaarrr was my first Voivod experience, the first cassette I was able to land of the Canadians through a crafty trade with a fellow junior high student who didn't like it and would be far happier with a copy of Anthrax' Spreading the Disease. Who truly made the most of that deal might be an arguable point, but forgive me for feeling the victor, because this was my introduction to what would become one of my most venerated bands of the 80s. Sure, my Mom took the tape away after reading that it had a song called "Fuck Off and Die", hiding it alongside Slayer's Hell Awaits, but that fateful shoebox on top of the refrigerator did not prove quite so elusive, and eventually I was able to enjoy this to the fullest.

Right away you could see what would attract a tween Dungeon Master to this album, that dreary and frankly horrifying album artwork, another Away classic, with the 'voivod' creature fused into some flame hurling, post apocalyptic megatank chassis of destruction. Spikes everywhere, to impale foot soldiers and of course any unwary pedestrian who would dare cross the fucking street around this thing. The best band logo ever. Rrröööaaarrr took this unforgiving, 'don't fuck with me' attitude to the music itself, which was incredibly brutal and primal compared to most of the other metal I was listening to at that age, but there was something more, far more happening which confirmed and maintained its allure, and has to this very day. In retrospect, having now also owned War and Pain for a considerable length of time, I can note a number of mutations to the core, punk thrash aesthetic that would be further refined into Killing Technology. It's still an irradiated cannibal scurrying about the streets, picking through refuse and taking on all comers with its spiked bat, but the songwriting takes a stride forward and there's a broader dynamic range through the track list.

There's a bigger budget here than War and Pain, or perhaps I should say that there's an actual budget. Period. Gone are the totally disgusting, sloppy guitars from the debut, replaced by a meaty but resonant tone that better suits the chords. Piggy's leads were still as wild as uncaged apes, but the rhythm guitars are just so more poignant, the riffing progressions quite catchy in pieces like "Korgüll the Exterminator" one of the most ambitious among these, and one of the best of all Voivod. What's more, you've got a lot of eerie melodies being flung out into the apocalyptic nightscape of the album's atmosphere, and Denis was starting to sharpen his unique, dissonant approach to chords, while clobbering the listener with a lot more mutes and metallic patterns than the more purely punk aesthetics the first time out. Away's drums here are loud as hell, maybe a fraction TOO loud, but the guy was hitting so hard that it's a wonder he wasn't instantly catapulted into the Dave Lombardo rank in terms of percussion heroes. The bass-lines are even more intense this time out, but the more prevalent tone of the guitars is better balanced against them.

As for Snake's vocals, still pretty bloody and brutal, but there is more of a haughty shout to the inflection than his wretched performance on the debut. The song selection is just so much better, with rich riffing sequences in "Thrashing Rage" and "Ripping Headaches" that set the groundwork for Killing Technology, frivolous leads wrought over the grinding nuclear inferno of the rhythm tracks. Still a lot of punk in here, especially in tracks like "The Helldriver" which remind me of earlier C.O.C.. I can see why some folks believe this album has a lot of repetition, the constant crash of the drums does get redundant as the 38 minutes stretch on, but when it comes to the barebones riffs, there is admittedly a good share of variety, from the more robust and pissed off chord-storms to the NWOBHM styled structures and solos that the band brought over from their obvious Venom and Motörhead influences (the latter of which might have also inspired the use of umlauts in album titles like this one). In general, though, Rrröööaaarrr is more clearly a 'thrash' record in the purest sense of the word.

It's not entirely a work of genius like its successors, and I have a few problems with the mix levels, but the calamitous cacophony of sounds and relentless lyrics have endured for me through the years almost as much as those monolithic works to follow. This music is not going to appeal to you if you're a pussy or a stalwart audiophile; it's restless and off the hook for much of the run time. It's not a mere recycling of speed metal riffs from other bands, either. Though War and Pain was unique enough in its own right, Rrröööaaarrr was truly a band apart from the rest of the world, and this is a timeless and turbulent record that has never been reproduced by anyone, even if its originators would surpass it repeatedly. Rusted madness, social collapse mayhem, and molten industrial spew. The grimier side of 'cyberpunk' joined to the visceral belligerence of the emergent thrash genre.