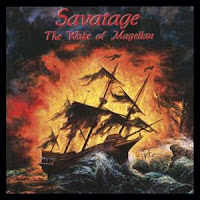 If The Wake of Magellan sounds like you've heard it before, that's because you probably have. With the possible exception of seeming more guitar-driven than the prior Savatage album, Dead Winter Dead, it sets sail on a comparable conceptual voyage, with the same, bold production values and level of refined orchestration. Contrary to how it reads (and looks) on the cover, this isn't exactly an album about the Portuguese explorer, but a series of current events involving Romanian castaways, an Irish heroine, and an elderly Spaniard who decides to commit suicide at sea, but is thwarted at the last moment when he has to instead choose to save another. Seems convoluted, I'll admit, but it's handled intricately, and no one will be accusing Savatage of not having thought this through.

Where Dead Winter Dead integrated a lot of festive, wintry classical pieces into the original material, this album actively pursues a different aesthetic. The acoustics of "Morning Sun" reflect on an airy, bright European port city, and the piano melodies throughout seem more distinctly 'warm' than they were up in Sarajevo. The guitar tone is comparable, but perhaps even louder than it was, which make sense, since they seem to push the album forward a lot more often. There is also some degree of experimentation with vocal arrangements, especially in weirder numbers like "Complaint in the System" or "Blackjack Guillotine". But, apart from these nuances, the impact of the music is eerily similar to Dead Winter Dead, only I'm afraid it's just not as catchy. I like the ramping up of the potency to the rhythm guitars, but so many of the riffs here are throwaways, cheap and generic groove patterns as in "Another Way" or the boring, climactic chords in the key-laden "Underture". There are a lot of softer moments through the album, like everything else the band did from 1991 on, but I found the balladry to be sadly lacking in quality, and the rock opera elements still inferior to Gutter Ballet.

On top of that, I still don't like Zak Stevens. Like Dead Winter Dead, he's not a huge irritant this time around, but I can't help but feel that every song on this effort would sound superior with the diction of someone fresh, or Jon Oliva himself (who again only sings a few times). I can just envision that rabid rasp of his slicing through the brightness of some of the riffs, where Stevens still comes off too much like someone who is trying and not succeeding. That said, really the worst aspect of The Wake of Magellan is that I find it almost impossible to remember any of the tunes. Few are outright bad or embarrassing, but none of them achieve that memorable climax so common to Hall of the Mountain King or Gutter Ballet. The balance of the metal instruments and orchestration is incredibly flush, like the band were truly on the verge of grandeur had they pursued this space for one more full-length, but despite the cohesive nature I feel, and the truly interesting subject matter of the story, this one rarely leaves port for my listening rotation. Big, bold, and beautifully average.