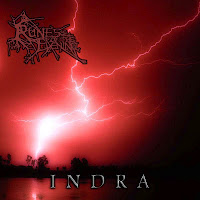 Like their Agni EP, Runes of the Evening's Indra takes on a primal Hindu force, in this case the deification of thunder and war, and then interprets its theological subtext into a mesh of melodic death and black metal. Do not expect a recording of sitars and other folk instruments, for this is sheer destruction redolent of Norse and Swedish stormers of the 90s like Dissection, Immortal, Naglfar and so forth. It's admittedly a compelling idea, and I wonder if they'll take it further and cover a host of other divinities. I was pretty surprised when reading up on these Texans, not only for their literary tastes, but also to find out that a few of the band members were previously involved in another Texas band I've covered recently, Psychiatric Regurgitation; though between the two, sounds and subject matter are quite a lot different, apart from both acts having a great deal of musicality.

Of the pair of EPs, I found Indra more to my liking than Agni, if only because I felt the dynamic range here was stronger and the tunes more emotionally resonant and better paced. Though for all I know the songs might have been recorded in conjunction with the others, this seems a measure more progressive in terms of its construction. From the great pianos that herald "The Spiral Descent" to the great warlike cadences in the bridge of "Deities of Our Deities", the compositions were more dramatic, and particular melodic strains were better able to capture my attention. The vocals are still swarthy and grimy black rasps, and the intensity of the drumming is comparable, but even though a few of the songs here are longer than anything on Agni, I found them more durable and more interesting to explore, with a few of the depths of "What Once Was" numbering among the most desperate, atmospherically effective I've yet heard. You've still got a variety of breakdowns, blast beats glazed in floods of harmony, and mid-paced, somber cruising melodies, but in the end they are simply catchier.

The production actually feels a fraction less 'together' than on Agni, but this is probably because the guitars get more room to breathe (essential, since if what I've read is correct, there are actually three of them). Much of the material doesn't feel as condensed. Interestingly, both of the EPs were mastered by death and thrash metal legend James Murphy, but overall I wouldn't sway that either of them were overly cleaned up. The best moments for me were where the mournful streams of melody played against the harsher timbre of the singer/bassist's delivery, and some of the transitions were quite well handled. Though I wouldn't dub it 'unique', Indra also feels mildly fresher than its companion. The writing is pretty close, enough that the two could have been conjoined to a single album, but with the slight differences, it also makes sense that they'd be separated. Beyond the other bands I mentioned, I feel like fans of Finland's Rapture or Katatonia's Brave Murder Day might also dig this, the floes of sad guitars often reminded me of those.