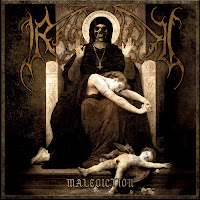 Though I've no doubts Ragnarok are one of the most consistent of Norway's lesser known 90s black metal veterans, my interest in the band started to wane after their 1997-2000 material, the peak of which was their incredibly satisfying sophomore Arising Realm, on which the songwriting was simply fantastic. In the interim, they released one pretty decent record with 2004's Blackdoor Miracle, but the others have seem to have flown in one ear and spat back out the other. Part of this is that Ragnarok have never been known for having the most distinct style among their countrymen. Musicality and aggression have never exactly been the band's kryptonite; they excel in both areas, but where groups like Burzum, Emperor, Enslaved and Ulver had unique traits which spun their immortal legacies, Ragnarok had a little bit of this and a little of that to bring to the table.

That said, what they do, they have almost always done quite well, and Malediction, their 7th and latest full length, coming two years after Collectors of the King, is a colossal, crashing and competent excursion into the band's insidious grandeur, melding together elements of most of their prior releases into a bright, savage display of atmospheric carnage. Nihilistic floods of dense chords are strewn with diabolic tremolo picked passages, while the hammering blast beats hurl the earth asunder in seismic fits. Ragnarok plays loudly, and it plays abrasively. This black metal is meant to scrape at the foundations of Heaven until the clouds cower from the incendiary onslaught. Subtlety and nuance are not expressions in the Norwegians' vocabulary; they storm and swagger and then storm some more until your face caves in. Not that this is some mere, simplistic bludgeoning, there are enough moments of atmosphere and variation permeating the blitzkrieg to keep the audience from growing exhausted, from the symphonic ambiance that heralds opener "Blood of Saints" to the twisting, glorious harmonies that inaugurate "Dystocratic". The bass is repulsive and grimy, and the vocals, while nothing out of the ordinary, are gruesome, direct, and leave a trail of angels' blood in their wake.

There are indeed some great tracks here, in particular "Divide et Impera" with its hostile interchange of punchy bass lines and death-like tremolo riffing; or the more melodic twists woven into tracks like "Sword of Damocles" and "The Elevenfold Seal" which pay homage to the great Swedish black metal of the mid 90s. But in the end, I felt like the album was divided up between truly inspired passages and then others that felt as if they were just more of the same. Being someone almost genetically programmed to enjoy this style, I definitely had a fonder reaction to Malediction than Collectors of the King, but ultimately I wasn't entirely mesmerized by its ghastly procession. It's a spirited work, with no signs of aging or slowing down creeping into the joints of longtime thunderer Jontho, and the vaulted sense of magnificence that often characterized earlier records from Emperor, Dark Funeral, Gehenna, Marduk, Gorgoroth and 1349. In no way a disappointment if you're a frenzied, long term fan of their sound, but it doesn't really graft anything new onto the established formula. Good stuff, certainly, but not their best.