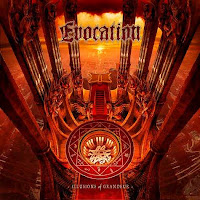 Long primed as one of the flag-bearers for the current crop of retro Swedish death metallers, Evocation have maintained a reasonably high profile since they re-emerged from the underground in the 21st century.
Up to this point, I've enjoyed all their studio efforts, in particular Tales from the Tomb in 2007, and had every expectation of lavishing praise upon this latest full-length. For some reason, though, this record just isn't sinking in with me, perhaps because, for the first time, Evocation don't sound so much like a fresh take on an old feel, rather than a smattering of ingredients from other, prevalent Swedish acts, and I was constantly feeling distracted with where I had heard this or that riff sequence, or one quite like it...

Don't get me wrong, they've not become a group of plagiarists or precise clones, but so much of the song process here reminds me heavily of their contemporaries Amon Amarth, that with the exception of the more rasped edge to the vocals, I almost though I was experiencing a pseudo-sequel to Twilight of the Thunder God. One of the tunes even guests Johan Hegg. Largely built on slower, driving guitar patterns threaded with somber, mug smashing melodies, pieces like the titular opener reek of those familiar, frothing waves. There are also lots of picking sequences which recall the late At the Gates, particularly in the bridging riffs of "Well of Despair" or the escalation through "Perception of Reality". I'd also add Hypocrisy to the list of influences, especially their late 80s/early 90s phase, with those floods of melodic-imbued, simple chord structures that steer the drama of the bloodied vocals. I suppose, to some degree, these similarities were always present in Evocation's earlier records, but here they seem to have crowded the spotlight, and thus Illusions is a work of diminished distinction.

Not to say that the album doesn't have a few highlights in terms of brighter, memorable riffs, but they seem to be seated amongst a slew of average neighbors which serve little more than to bludgeon along and fill space. The mix of the record is both bold and laid back, another factor reminding me of Amon Amarth, and this is a contributor to how the songs tend to 'march along', but never explode. The vocals were never the most unique element of Evocation's style, but here they border on annoying predictability, subdued as they strive to match up over the beats. Guitar tone and drums have a higher end production, but nothing you haven't heard before from various of their countrymen over the last decade. You get a good bass level, and the songs are reined in at around 3-4 minutes, with little fatty excess to bore the listener, but ultimately Illusions of Grandeur does not feel so inspired as even its more divisive predecessors Apocalyptic and Dead Calm Chaos, and hopefully next time they'll grasp at some broader, exciting dynamics. Not bad, just not on par the other records.