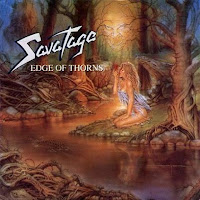 Being that Edge of Thorns marked an enormous transition for the band, Jon Oliva departing from his frontal duties to serve more as a 'creative' consultant, I might somewhat forgive it for some degree of shakiness. After all, Jon's voice is approximately 50% of why I listened to the group, the other half provided by Criss' guitar techniques. However, my early reaction to the Streets followup was one of utter revulsion, and at no point in the ensuing 20 years have I ever gone back to this and been able to reverse my judgement. Each exposure to Edge of Thorns is like another smack to the gob, a kick to the knickers, and ultimately this has proven one of my least favorite efforts of their career, and I was even more disappointed than on the overly dramatic Streets.

The first (and not the only) problem I have with this album is in the choice of vocalist Zak Stevens, who, through no real fault of his own, manages to soil the entire experience of what might otherwise be a mediocre selection of mid-paced, generally boring riffs that completely fail to evoke the same marvels as the band created during their peak (1983-1989, excepting Fight for the Rock). Gone are Jon Oliva's feral ravings and fragile undercurrents. Stevens sounds like an early round reject for American Idol, or someone who escaped a Skid Row cover band (though even Sebastian Bach has more acid in his inflection). Don't get me wrong, he's far from the shittiest singer I've heard step into a major metal outlet. Everything I've read or heard of Zak seems like a standup, enthusiastic fellow. He has the technical proficiency required to sing in key, and he doesn't shy away from attempting to implement a bit of Oliva's hard fought aggression. He can do delicate, and when he hits his swarthy lower range he reminds me of Daphne Zuniga (as Princess Vespa) in Spaceballs, singing the old spiritual "Nobody Knows the Trouble I've Seen".

It's not so much a case of 'Ripper' Owens, where you've guy singing in a comparable style and range to his predecessor that somehow always feels forced or fake. No, Zak just sounds fake all the time here. His voice has always seemed to feel 'separate' from the music here, even after decades of getting used to him on this and the later records. Take "Degrees of Sanity", for instance, which might have been a decent atmospheric crawler of a track if not for Stevens' brooding timbre sounding anti-climactic and, frankly, awful, especially when he tosses a bit of 'edge' or grit to his tone. But the lows are not low enough. The hardness does not bite enough. All of that manic anger and passion that once defined this band has been leeched away, supplanted by somnolent, predictable and overbearing smoothness that gimps all of the tormented emotions that attracted me to Savatage. He makes about half the songs on this album, including the title track, sound like Survivor wrote them. Lots of needless rock refrains and dated, insincere chutzpah. I won't even get into how laughable the guy sounds in the ballads like "All That I Bleed", which makes even the wussiest Streets material seem like titanium alloy by comparison...

Which leads me to my next issue with Edge of Thorns: it's more or less a rehash of the two albums before it. Perhaps mildly more 'metal' in overall content than Streets, but just as privy to failed mainstreaming rock ballads and hammy theatrics. In attempting to build the same mood and drama as Gutter Ballet or Streets, we end up with a bevy of dried out, antiquated middle of the road riffing sequences. Criss still shines in his lead expositions, wailing and shredding up to his reputation within the verse/chorus confinements he himself helped create, but much of the record lacks balls, it's like cheap radio AOR branded with the Savatage logo. The Floridians were never strangers to groovy hard rock dynamics, but fuck, "Lights Out" might have well just been on a Skid Row or Dangerous Toys record. All it's missing are the star-starved, fishnet-stocking skanks. "Skraggy's Tomb" sounds like something Jackyl would write.Vapid, escalating Zippo waving pap like "Miles Away" or the Floyd-ish "Follow Me" is just as uninspired and pathetic as anything you'd find off Fight for the Rock...

Once again, there are TOO MANY ballads, and we're not talking anything with "Silent Lucidity" potential here, but a handful of safely coifed album fillers like the all-too-aptly-titled finale "Sleep". Stripped down, boring acoustic guitars, no real atmosphere to speak of, and vocal lines that might has well been written by any Top 40 surrogate. Though the bass has a decent, loud tone, and the rhythm guitar a bit of processed punch that rendered it more modern than the prior albums, these instruments and the drums might as well have been phoned in by session musicians. There is no distinction. No personality to the performances. Apart from the gracious glaze of lead in "Labyrinths", the two instrumentals on this album are dry of ideas and useless; compare them to "Silk and Steel" or "Temptation Revelation" or "Prelude to Madness" and feel just how lazy and needless they are. Even where Savatage tries to build a decent emotional climax to a track, like in "Conversation Piece" the payoff is puked upon by garbage lyrics:

Like pieces of myself/cut off in desperation
As offerings to thee/I keep them on a shelf
They're good for conversation/Over a cup of tea, yeah, cup of tea

Really? Ooooh yeah. Pure me a Tetley, and then fuck off!

Perhaps the greatest tragedy, though, is that this was not only Criss Oliva's studio swan song with the band, but the end of his musical career, taken in a fateful car accident the October of the same year. I've explained in other Savatage reviews what an influence this guy had on my own development as a teen learning the instrument, and thus its doubly bittersweet that he would leave us on such a stagnant note. To tally up the number of interesting guitar licks on this album, I would have to cut off all the fingers on my left hand, and two from the right. It is truly that empty and uninspired, poppy and production-nullified metal with a selection of cheap choruses and bland rock & roll hooks that fucking Foreigner would have left on the cutting room floor. Normally, if the music was decent, and the vocals were something I could remember 5 minutes after listening, I wouldn't mind this approach. There have been commercial hard rock and wimp-metal albums I've enjoyed, but Edge of Thorns is just an overpolished, overhyped, rose scented toilet bowl ready for a good dump to remind it of its true purpose.