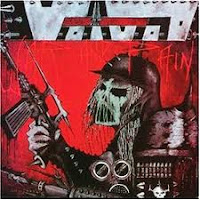 Some dream of perfecting their pastry baking and bonbon skills, so they might end up on an episode of Cupcake Wars. Some just dream of the day they can improve their golf game and compete in some tournament Open. I, on the other hand, dream of melted flesh, nuclear Armageddon and the warring tribes of mutants, cannibals, cockroaches, disgruntled postal employees and other sure survivors that would ensue from such a scenario. When the young Canadians wrote War and Pain, they were thinking of these same things as inspiration, and thus, for all its faults and flaked off rust, I still wanna take this album hand in hand and gallop off into an irradiated cloudset together (we wouldn't be able to see the sun for a few years).

To claim that War and Pain feels underdeveloped compared to later records like Killing Technology, Angel Rat or Nothingface would be an understatement, because this is the antithesis of eloquence and experimentation. This music is not about progression, it's about abuse. Though drummer Away's unique artistic perspective and the hostile, post-apocalyptic lyrics set it apart from quite a number of other speed, thrash or crossover records of its day, you could say Voivod had a lot in common with bands like Cryptic Slaughter and Corrosion of Conformity just as much as it mirrored Venom or Slayer. In fact, despite the fact that the Canadians incorporate a bruising NWOBHM shuffle to some of the riffs here in tracks like "Suck Your Bone" or "War and Pain" itself, with a few heavier muted metal passages, this is pretty much a punk album, with simplistic chord patterns that are half the time predictable, half the time spinning off into something more unusual. Mad Max anarchy unfolds throughout the track list, but then there seems to be that added edge of ambition and musicianship which separated the two strains of extremity.

But, as crude as this debut felt, even for the year of its release, there is something tangibly charming about the Canadians. For one, the vocals of Snake here were intense, placing a strained, growling edge on that post punk inflection he would hone through the rest of the band's career (1987 and beyond). The bass is far more prominent and repulsive than most punk music, making it feel more like a caustic, ghetto grind. The guitar tone is quite choppy here, and really the whole album feels like a mess, but there was already something about Piggy's playing that set him apart. The leads in tunes like "War and Pain" were more or less your average blues wailing, but then he'd explode off into other techniques that were more redolent of an Eddie Van Halen if he had been soaked in rust and radiation. The overall aesthetic to the album is one of anger and darkness, it never feels bright or even remotely enthusiastic, but there are a few more psychedelic passages like the end of the title track, or the echoed intro to "Voivod" itself" which foreshadow the band's future.

War and Pain is a great record to throw on if you're in the mood for something unfettered by the burdens of polish and professionalism. I actually like to shuffle these tunes in a playlist with Corrosion of Conformity's Animosity, Repulsion's Horrified, and selections from the Misfits, GBH, The Exploited, maybe some early stuff from The Accused; a giant, splatterific, Cold War terror and gore grinding punk-metal paean that really stirs up the blood. It's also got some parallels to Venom's first few records in terms of just that raw level of theatrical aggression, not to mention the bass-driven foundation for the songs is highly similar to that of the mighty Motörhead. I don't want to deceive anyone, though, this is pure primacy compared to even the band's sophomore Rrröööaaarrr, and I'm far more of a fan of their 1987-1989 material than anything else. That said, I've grown to appreciate this debut forever for its repugnant innocence, bleak world view and utter disregard for subtlety and taste. The 3-CD reissue from 2004 is fucking phenomenal, packed with live demos, videos, and whatever you'd want from this period other than locks of Blacky's hair.